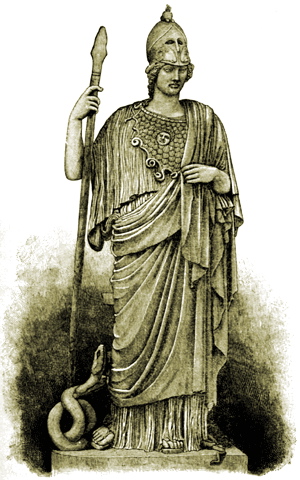 The city of Athens is named after Athena goddess of wisdom, war, strategy, industry, justice and skill. Athena was a virgin goddess, protective of both men and women.

In the Greek mythology she appears as a helper of many heroes, including Odysseus, Jason, and Heracles. In Classical Greek myths she never consorts with a lover nor does she ever marry, earning the title Athena Parthenos.

According to the greek mythology the Council of the Twelve Greek Gods of Olympus, Poseidon and goddess Athena did stake their claim to Attica.
The historic city of Athens started off as a hill-top settlement on the Acropolis around 4000 years before Christ, although it was in fact inhabited at around 8000 BC by the Pelasgians.

From c. 800 to 500 B.C. as population increases and living standards improve, there is a continuing development, through phases of tyranny and wars with Persia, of the city-state and its most important manifestations in Corinth, Athens, and Sparta.

In Ionia, which had contact with the civilizations of Persia and Lydia, there is a budding and then flowering of Greel art and thought that would engender the golden fruits of the Classical Age in Athens.

Two conflicts spanning 21 years, beginning with the Athenian-aided revolt of Greek Ionian colonies (499-493 B.C.)against Darius I of Persia. Subsequently (493 B.C) Darius invades Greece with large fleet, which is wrecked by a storm of peninsula of present-day Mount Athos.

A series of minor skirmishes Sparta and Athens, lasting from 460 to 451 B.C., after which a five-year armistice and then a shaky 30-year peace treaty are agreed upon.

The major war between Athens and Sparta, an off-and-on again affair covering more than a quarter century in which several Athenian near-victories are squandered by tragic military and political miscalculations.

During a pause in the war with Sparta, Athens moves to take over Sicilians tributes and resources and to cut off the main source of the Spartan food supply. Instead, political infighting and indecisive leadership by generals result in a catastrophic Athenian defeat.

The fourth century is marked in its first half by struggles for dominance among Sparta, Athens and the newly emergent Thebes, with Persia holding the balance of power; and in its second half by the sudden rise of Macedonia under Philip II and his son Alexander. Meanwhile, Athens continues as Greece's cultural center.

Beginning the campaigns as a continuation of Philip's policy of uniting Greece through war with Persia, Alexander soon finds his own vision - a synthesis of the cultures of East and West - and sets out to accomplish this by conquering the entire known world from India to Spain, Italy and Sicily.

Greek culture and language exercise a considerable influence on the Roman world during the Pax Romana and aid enormously in the dissemination of Christianity.

A continuing struggle for a spiritual as well as a geographical identity, as disparate forces attempt to promulgate their visions of a modern Greece among the people in many ways still shackled by the 400-year Ottoman era.

Watch this video presented by The Hellenic Ministry of Culture and the Hellenic Culture Organization S.A

3000 B.C. Evidence of first settlement around the Acropolis

499 B.C. In Athens, Aeschyluw has first of his plays produced, introducing the second actor into Greek drama

479 B.C. Defeat of the Persians at Plataea by Greek force led by the Spartans

431 B.C. Athenians withdraw behind the long walls of Piraeus and Athens, leaving Spartians to ravage countryside to no avail

430 B.C. Plague breaks out in densely populated Athens, Hippocrates of Kos called on for medical aid

424 B.C. On the Acropolis, the exquisite Temple of Athena Nike, designed by the architect Kallikrates, is finished

421 B.C. The Peace of Nicias, a 50-year pact, is negotiated between Athens and Sparta

404 B.C. Athens capitulates unconditionally. Oligarchs are returned from exile and established as the infamous Council of Thirty, instituting reactionary reign of terror

421 B.C. Athens and Thebes in alliance

336-323 B.C. Expansion of the Macedonian Empire under Alexander the Great through the Mediterranean, Middle East as far as India

323 B.C. Death of Alexander in Babylon, probably of same type of fever that killed Hephaistion. He is 33 years old

331 B.C. In Athens, the Temple of Olympian Zeus, originally started in 515 B.C., is completed under the Roman emperor Hadrian

A.D. 330 Foundation of the Byzantine Empire by Constantine I

1687 The besiege of Acropolis from the Venetians

1834 The small, ruined town of Athens, totally unsuited for the task, becomes the new Greek capital.

1940 The big "OXI" (no). General Metaxas delivers his famous "OXI" to Italian demand that he allow Mussolini's fleet access through the Greek ports

1967 Exile of King Constantine I. Greece ruled by Colonel Papadopoulos

1998 Devaluation of the drachma and exchange to Euro

Back to Home Page