Alexander the Great or Alexander III of Macedon, King of Macedon, ruler (Gen. Emperor) of the Hellenic Alliance against the Persian empire, successor to the Pharaohs of Egypt, Lord of Asia and northwestern India, whose achievements were the foundation of the kingdoms of his successors. The Alexandrian times are the end of the classical antiquity and the beginning of the period of world history known as the Hellenistic. He was one of the greatest Greek generals of history, at the age of 33 years had conquered most of the known world (4th century BC).

Alexander the Great was born in Pella in Macedonia in July of the year 356 BC. His parents were King Philip II of Macedon and Princess Olympias of Epirus. He died in Babylon in the palace of Nebuchadnezzar II on 10 June 323 BC, at just 32 years and 11 months old.

King of Macedonia, continued the work of his father, Philip II. Philip II was highly capable general, politician and diplomat, reformer of the army and makedonikou state.

Alexander the Great completed the integration of autonomous Greek city-states of the season, and won almost all the known world at that time (Asia Minor, Persia, Egypt, etc.), reaching the outskirts of India.

Alexander the Great was born in July (the month Loos calendar of Macedon), 356 BC in Pella, capital of makedonikou state. According to tradition, was born the same night that the Irostratos burned the temple of Artemis at Ephesus and while the magicians of the city, seeing the destruction, rushed into the streets and portended the subjugation of Asia. Indeed, the tradition says that the lineage goes back to two major forms of ancient Greek tradition: the demigod Hercules was the founder of the dynasty of Macedon and the Argives Neoptolemus, son of the hero Achilles, founded the royal house of Molossos, a member whose mother was the Olympics. The origin of the legendary Alexander was instrumental in shaping his character, from the first years of his life.

In 349 BC Leonidas, a relative of Olympias, claimed responsibility for the upbringing of the Prince. Under his supervision, Alexander was taught arithmetic, geometry, music and was particularly concerned with riding. Currently, as delivered, Alexander tamed Bucephalus. Later, Philip commissioned studies of his son, to Aristotle, who taught him medicine, literature and political science. The study with the great philosopher played a key role in the character of the young Alexander.

In 340 BC Alexander stopped his studies and returned to Pella, where he took an active part in the political life of Macedonia. During his campaigns Philip trusted Alexander for the administration of Macedonia. At 16 years old and while his father was missing in Byzantium, Medi suppressed a rebellion. During the battle of Chaeronea in 338 BC, Philip crushed the combined forces of Athens and Thebes. Alexander led the cavalry. After the defeat of the Athenians he went to Athens as an agent of his father. At the congress of Corinth which followed the battle of Chaeronea, Philip was elected "emperor General of Greece" in view of the campaign against the Persians. 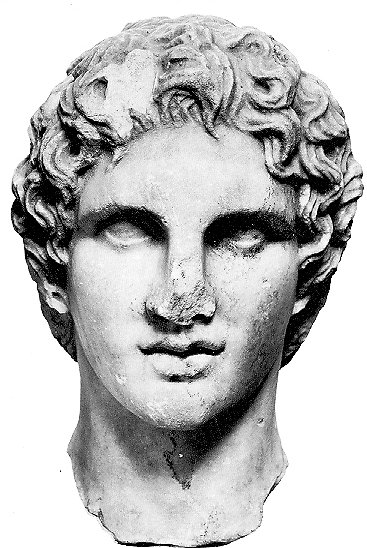 The “OATH” of ALEXANDER the GREAT

“IT IS MY WISH, NOW THAT WARS ARE COMING TO AN END, THAT YOU SHOULD ALL BE HAPPY IN PEACE. FROM NOW ON, LET ALL MORTALS LIVE AS ONE PEOPLE, IN FELLOWSHIP, FOR THE GOOD OF ALL. SEE THE WHOLE WORLD AS YOUR HOMELAND, WITH LAWS COMMON TO ALL, WHERE THE BEST WILL GOVERN REGARDLESS OF THEIR RACE. UNLIKE THE NARROWMINDED, I MAKE NO DISTINCTION BETWEEN GREEKS AND BARBARIANS. THE ORIGIN OF CITIZENS, OR THE RACE INTO WHICH THEY WERE BORN, IS OF NO CONCERN TO ME. I HAVE ONLY ONE CRITERION BY WHICH TO DISTINGUISH THEM VIRTUE.

FOR ME, ANY GOOD FOREIGNER IS A GREEK AND ANY BAD GREEK IS WORSE THAN A BARBARIAN. IF DISPUTES EVER OCCUR AMONG YOU, YOU WILL NOT RESORT TO WEAPONS BUT WILL SOLVE THEM IN PEACE. IF NEED BE, I SHALL ARBITRATE BETWEEN YOU. SEE GOD NOT AS AN AUTOCRATIC DESPOT, BUT AS THE COMMON FATHER OF ALL AND THUS YOUR CONDUCT WILL BE LIKE THE LIVES OF BROTHERS WITHIN THE SAME FAMILY. I, ON MY PART, SEE YOU ALL AS EQUAL, WHETHER YOU ARE WHITE OR DARK-SKINNED. AND I SHOULD LIKE YOU NOT SIMPLY TO BE SUBJECTS OF MY COMMONWEALTH, BUT MEMBERS OF IT, PARTNERS OF IT. TO THE BEST OF MY ABILITY, I SHALL STRIVE TO DO WHAT I HAVE PROMISED. KEEP AS A SYMBOL OF LOVE THIS OATH WHICH WE HAVE TAKEN TONIGHT WITH OUR LIBATIONS”. In 337 BC, Philip, aged 48 engaged Cleopatra, a beautiful noble Makedonitissa. The Olympiad was furious, as her prestige got completed destroyed , while if Cleopatra gave Philip a son , he than will be supplanted Alexander in succession. This caused inconvenience to previously harmonious relations of Alexander with his father. Olympiad remained in her room at the celebration of marriage, but Alexander was present, fading gradually his self control. The bride's uncle challenged him in a toast and Alexander threw a cup at him. Philip tried to impose order, but had drunk too much wine and the lame leg betrayed him. Alexander mocked his father and exited the room.

Later retired to Epirus with his mother. However, Alexander the Great returned to the palace and reconciled with Philip, but Olympiad remained in Epirus. In 336 BC Philip married a daughter of the king of Epirus and the brother of Olympiad, Alexander. Organized royal feast on Aiges, with parades and cultural events. As Philip stayed on stage to declare the Games, the bodyguard of Pausania went ahead and murdered him.

When Philip was assassinated, Alexander was only 20 years old and seemed vulnerable. Nevertheless, he moved quickly eliminating all potential claimants to the throne, which he occupied. Invaded Thessaly and then proceeded to the south, recognized by all.

There is no revolutionary movement and on autumn of 336 BC the Congress of Corinth proclaimed him as it had declared Philip, "strategic emperor of Greece" for the campaign against the Persians. In the spring of 335 BC marched against the Illyrians and Trivallon, reaching from Amphipolis to the Ainos in ten days. After defeating the Thracians there, went to the Danube, defeated Trivallous and attempted raid against Geton, which he was forced to discontinue because the revolt of the Illyrians. Then he turned to the south and the subjugated Agrianes and Paeonian, ensuring full sovereignty in the region.

As long as Alexander the Great was fighting in the north, the Thebans revolted and besieged the garrison of Macedonians Kadmeia, while in Athens and other cities dominated turmoil caused by the antimakedonikoi spreading rumors that Alexander is dead. Alexander with an exponential trend, went through the 500 km from Illyria to Thebes in twelve days. There, after a brief but fierce resistance of the Thebans managed to subjugate them. Then convened the Public of the Greeks to decide the punishment of Thebes and ordered the death of six thousand Thebans, and sold as slaves the other thirty thousand inhabitants of Thebes.

return from "Alexander the Great" to "Home Page"