Around the west of the Peloponnese are the ruins of Olympia, an athletics venue and a religious center which thrived for more than a thousand years, from the Mycenaean through Roman times. It was dedicated to the Greek god Zeus, ruler of Mount Olympus.

Held every four years between 776 and 393AD, the Olympics were originally created to honour the Greek god. While competition was no doubt paramount, the ancient games always had spiritual overtones. Banned in 394 AD due to its pagan origins, the athletics events only returned to Greece in 1896, with the first modern Olympics staged in Athens instead its original home. However, during the 2004 Athens Games, various track and field events were staged in Olympia.

Hordes of tourists descended an interest in the ancient site surged anew; however, the city still manages to maintain its original character.

Ancient Olympia, in particular, retains its aura of grandeur with the multi-columned Palaestra – many wrestlers trained here prior to the games – and there is an impresive stadium and a collection of temples set within its idyllic, verdant surrounds.

Patras, is the nation’s third largest city, with a population of 230,000. The hardworking seaport and university town can’t compare with the antiquities of Ancient Olympia but it has its share of Venetian castles and ruins. Patras boasts a thriving nightlife and arts scene – being the ‘European Culture Festival’ in 2006 – and Greece’s biggest bash, the annual Patras Carnival. 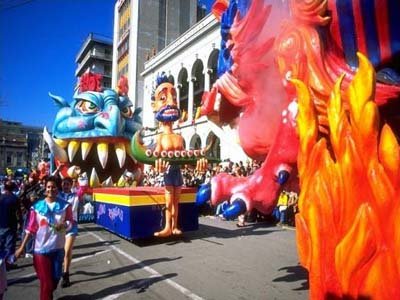 Beginning in mid January on Aghios Andreas, St Andrew’s Day-the Patron Saint of Patras- the festival continues for weeks. Festivities include Tsiknopemti, Smokey Thursday- marking the last day Orthodox Christians eat meat before fasting for 40 days until Greek Easter; the Carnival Parade with over 50,000 participants; and the grand finale where an effigy of the carnival king is burned in a giant bonfire along the waterfront, followed by a spectacular fireworks display. Rio is a charming seaside destination with summer villas, enticing nightlife and alluring coastal views. On a cloudless day, one can clearly see the world’s longest suspension bridge, the Rio-Antirio Bridge, connecting the Peloponnise to the Greek mainland.