The Medieval City of Rhodes

The Medieval City of Rhodes was built around Emborio, the main harbour and was protected by a strong and impressive wall.

The town was inhabited by Greeks and Jews, while the knights lived in the Citadel(Castello) which was the administrative and religious headquarters. Apart from such general purpose buildings as the Armory and the Hospital, the Castello included the Grand Master's palace and the "Inns" which were houses serving as dwellings and meeting places for knights of common ethnic background.

From the Gate of Liberty opened in 1924, one reaches the Arsenal Square, where the ruins of a 3rd century temple of Aphrodite can be seen. Opposite to this is the Inn of Auvergne of the Pins in the 14th century. The narrow lane behind the Inn of Auvergne leads to St Mary's Byzantine church, build in the 13th century, the church was used two centuries later by the Latins as their cathedral, then turned to a Turkish mosque known as Enderoum-Tzami. The Turkish additions to the building have been removed since and the church has been restored to its original form.

Close by the Inn of Auvergne is the beginning of the Street of the Knights. In the Hospital Square, where the street actually starts, stands the Inn of England, destroyed in the 19th century, this Inn was rebuilt in 1919 in accordance with the original design.

The Hospital of the Knights, across from the Inn of England, now houses the Archeological Museum. Its construction began in 1440 under the Grand Master de Lastic with funds legated by his predecessor Fluvian, but it took many years to build and was not completed until the time of the Grand Master of dÁubusson. Over the entrance , a bas-relief shows two angels holding the Order's pennant with the founder's plaque underneath. 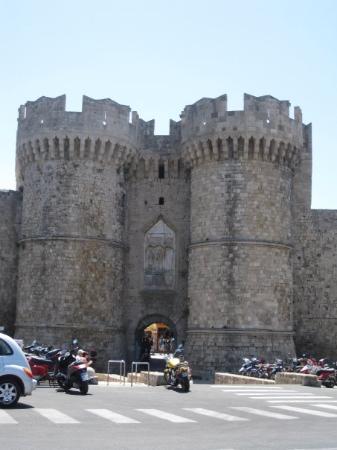 Proceeding along this street towards the Grand Master's palace, one can see on the left the northern facade of the Hospital, and exactly opposite the Inn of the Tongue of Italy, a typical example of a dwelling used by the Knights, built around 1519; besides this, a small nameless palace is followed immediately by the Inn of the Tongue of France, erected by the Grand Masters d'Aubusson and d'Amboise in the last years of the 15th and the first years of the 16th century.

The most sophisticated and decorated building in Rhodes, this house is probably only a part on the Inn of the Tongue of France.

Immediately after this building, a narrow street leads to St.Demetrios, a Gothic church built in 1499 on the ruins of the ancient temple of Dionyssos which, according to ancient sources, was a famous one in antiquity.

Back to the Streets of the Knights after this digression, one sees, after crossing the street that leads to St. Demetrios, a small church with a Gothic stone iconostas on the outside showing the France, i.e. the house of the chaplain of the Knights of the France, who served the same church.

At the end of the Street of the Knights, on the left-hand side, stood the Gothic Church of St. John, the Knight's patron saint. Built in the 14th century, it was destroyed by an explosion in 1856. 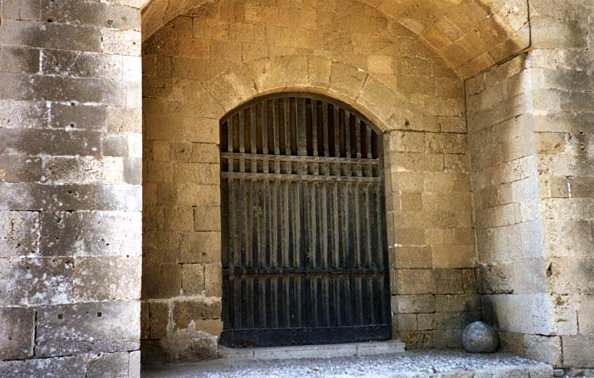 The northern side of St.John 's Square borders on the heavy, majestic facade of the Grand Master's Palace. The palace, dating originally from the 14th century, was almost entirely destroyed during the Turkish occupation, and was rebuilt, with rather excessive sumptuousness, by the Italians, the interior was decorated with mosaics taken from ancient buildings in Cos.

The position of the palace on the highest level of the medieval town is of interest, because it is believed, with good reason, that it is where the sanctuary of Helios stood in antiquity with its many precious ex-votos including the quadriga made by Lysippos , the great bronze-artist of the 4th century.

The Grand Master's palace stands in the heart of the Knights area; the Cannon-Cate to the west was accessible by a draw-bridge; St. Anthony's Gate can be seen beyond.

But the vital nerve of the old town on Rhodes was the bazaar street. Partially preserved at the eastern end of this street is an important medieval building known as "Castellania" it served as a trade centre and merchant's meeting place and housed various services, such as the offices of the market police.

On the way to the wall, one comes across monastery now known by its Turkish name "Hurmali Medresses"on the western side. Dating from the 14th century, this building presents both Byzantine and Gothic features, and it appears to have been a Greek orthodox monastery originally, taken over by the Franciscan monks in the 15th century.

A visitor who takes the street leading to the right from the Ahmed Hafouz library, will find himself all of a sudden in the middle of a perfectly preserved medieval Turkish town. If changed at all since the time of the Knights, this part of Rhodes may be said to have undergone an accentuation rather than a diminution of its typical character.

There are many noteworthy buildings in the Turkish quarter: Taketzi's mosque, a converted church of the 15th century; Sultan Mustapha's mosque built in 1765 and a Turkish bath-house, probably contemporary with the mosque, whose building materials include a large number of ancient marble blocks.

There is evidence that this was St.Catherine's Gate in the Middle Ages. Following the street parallel of the seaward wall, one comes upon St.Catherine's Hospital, founded in 1392 by passing Italian noblemen. On the right side of the street, not far from the St.Catherine's Hospital is the building known as Admiralty Palace which, despite its Gothic style, was in fact the residence of the Orthodox Metropolitan. The layout of this well-preserved mansion, gives a very good idea of what a well-to-do 15th century Rhodian household was like.