Rhodes Island, Colossus of Rhodes. The island lies in the eastern area of the Aegean Sea. There are many places that are of historical importance such as the Acropolis of Lindos, the Temple of Apollo, Acropolis of Rhodes and the old town of Rhodes etc.

Rhodes island has a very lively nightlife. You can have a great time visiting the Archaeological Museum or simply amble along the lanes of the Old City.

The Rhodes City has some interesting landmarks such as the Grand Master’s Palace and the Medieval City of Rhodes. It is amongst the best international tourist destinations. 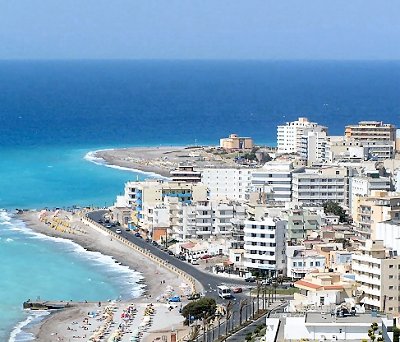 Rhodes has a rich history and throughout the centuries, it has always been a prime location due to the excellent weather, scenery and climate. It has many well-preserved monuments for unlimited sightseeing, which range from the Ancient times (Kamiros, Lindos, Ialyssos, Rhodes ) to the Medieval ( Knights Castle , Old Town) and finally to current times (Italian occupation architectural heaven). There are many picturesque villages that are examples of current local history and where the local produce, a key ingredient in Mediterranean cuisine are grown.

Beaches are beautiful, plentiful and unique. Visitors can find a beach according to their taste: their own personal beach, a populated beach, or one close to or far from their accommodations. Some beaches are sand, others are pebble and others are a mixture. The surrounding sea is rough on the West coast, but calm on the East coast. Tourists can choose between a busy tourist beach, and a virtually deserted and more private beach. 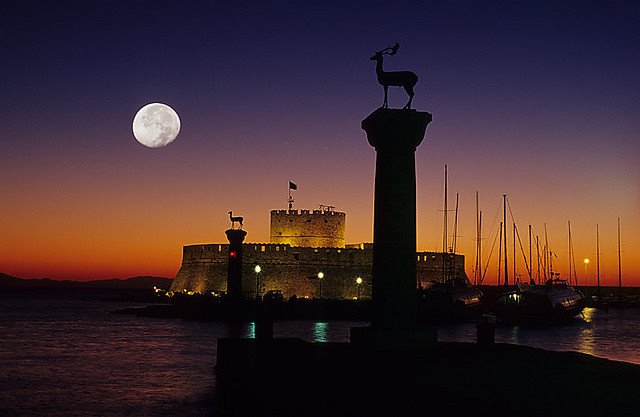 Rhodes Island has much to offer with regards to entertainment and dining. There are many bars, pubs, clubs that will enhance your nightlife with many different styles to fit your mood. Art galleries, national and local museums, theaters, exhibitions, shows will satisfy your artistic needs. Restaurants of all cuisines and of all styles are available to fulfill your gastronomic needs. Like an exquisite flower uprooted from the shore, afloat in the Aegean, Rhodes, that loveliest of islands, has been traveling in the Archipelago between West and East for millennial.

Europe and Asia with which Rhodes was linked until it became detached as a result of tremendous geological upheavals from the now just under 11 miles distant Asian coast - the old and the new, sun-lit legends and great civilizations that have left their indelible mark in the admirable monuments of the island, a superb climate under the most transparent of skies, sunshine almost throughout the year, and a luxuriant vegetation, combined fascinatingly to envelope Rhodes in unique magic.

Famous since ancient times, the island has been celebrated by ancient and modern writers, orators, historians and great poets such as Pindar, Aeschines, Strabo, Lucian, Horatio, Lamartine and others. They sang the praises of the majestic city of Rhodes, the island's capital situated at its northern most tip , whose history from as early as the later part of the 5th century B.C. but more markedly from the 3rd century onwards merges with the history of the island as a whole.

Rhodes was a favourite resort among wealthy and influential Romans and has exercised as strong an attraction on subsequent and contemporary generations, who have loved its climate, its beauty and its unforgettable charm.

The busy bazaar area offers goods and refreshments of many kinds, but in the twisting alleys by the southern walls there are no modern shops.

Along the waterfront outside the old town are the imposing administrative buildings and the cathedral overlooking Mandraki harbor, where the Colossus of Rhodes is believed to have stood. After the death of Alexander the Great Rhodes remained royal to his general, Ptolemy of Egypt, who was born on the island.

Beautiful Kallithea, formerly a spa, is a well-known spot on this coast, with a tiny sandy cove and lots of rocks from which to bathe , about 12 km out of the Rhodes town. It is one of the few places in Greece where scuba diving is permitted.

Faliraki beach, immediately to the south, has accommodation for all tastes and is fast becoming the water sports capital of the island with water scooters, water-skiing, paraskiing, windsurfing, and water slides.