Majestic and wild as it is, The Topolian gorge impresses us as soon as we enter it and start to enjoy the view of the dwellings of Ai Kyr-Giannis, Kapsaniana, Kartsomatado and Tsourouniana emerging from the thick green nature on the slopes of this picturesque gorge. Its length, from Topolia to Kartsomatado is 1500m. Its vertical cliffs reach 300m high, whereas the width ranges between 5 and 10 metres. On its right side a motorway passes that leads to the 9 villages of Kissamos. At this particular point there is a roadway tunnel which is a unique occurrence in Crete.

Within the area there have been developed nine chestnut producing villages, therefore called Kastanochoria(kastana means chestnuts in Greek). At Elos there are ten textile workrooms and a 30-bed accomodation community hostel. In the month of October when chestnuts ripen, it is the time for the Chestnut Festival which is characterized by a general participation of the people in it and has a look of folkloric contents originated from the past , just as a ‘thanks’ to earth.

Taking the road to the left, we approach Vathi or Koumeni(65km) with available furnished rooms to rent. In the area there are many wall painted churches, such as these of Ag. Georgios, Archangel Michael, Aghios Ioannis Chrysostom and the catholic little chapel of Virgin Mary. Visitors can be accomodated in furnished rooms to rent.

Further on the road leads to the seaside convent of Chrysoskalitissas (72.4km) and then to Elafonissi, a spot located at a distance of 800 metres from the SW edge of Crete.

Chrysoskalitissa is a convent(a womens monastery) consecrated to the Assumption of Virgin Mary and the Holy Spirit. It is erected on a rock emerging 35m over the sea level and it is 35m wide and 288m long.

According to the tradition, one of the ninety steps, which lead to the top of the rock, is of solid gold which, however, cannot be seen by sinful persons. That is why is been given the name Chrysoskalitissa (golden-stepped, in Greek). However, there are still the following versions:

When, in 1824, the Turks slew the women and the children on Elafonissi, they also attempted to pillage the monastery. However, they were prevented from doing so by a swarm of bees, which had had their hive on the rock. Besides, the monks hid the monastery’s treasure into one of the steps. A second version is that Empress Catherine of Russia had donated to the monastery a golden step. According to the third version, it is believed that the name to the monastery was given after the over 1000 year old carved and golden Virgin Mother’s icon possessed by the monastery.

The annual celebration at the convent takes place on 15th August and is honoured by lots of participants from all over Crete. 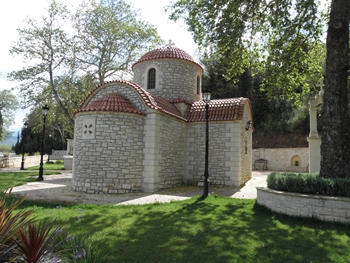 Elafonissi is a rather low islet located at the SW end of Crete. The islet is connected with the coast opposite by way of a 60 cm deep underwater furrow while, with calm sea-waters, one can walk through the shallow waters of the furrow. Located nearby are the islets of Mili and Messimo. The beacon on the desert islet has a 18mile range of light, whereas the hard blowing southwest wind many times gives rise to the largest waves in the Mediterranean sea.

Starting from Chania westwards, at the spot called Tavronitis 19.4km) where also the homonyms river runs, we turn to the left, on an eastward course, heading to Candanos, Paleochora and Gavdos island. In less than half an hour, we confront Voukolies (26.6km) the major village among six other villages. It is located on the west bank of Tavronitis. The visitor is given the chance to enjoy the hospitality offered at the large square-where there is a hotel and a restaurant. Every Saturday, ever since the Turkish occupation and even nowadays, there is in operation a market place(bazaar). It is said that the water from the Nebra fountain has curative qualities.

In the fertile valley of Selinos there is the major village of Candanos(57.3km), in the centre of a fully planted area of olive trees; each one of such trees yielding about 250 kgs of oil. Here there are a Court of Justice of the Peace, a police station, a post office, a hotel and a restaurant. The villages of Drys, Alygi, Strovles, Floria and Spina - all of them being chestnut producing areas- are administratively subjet to the major village of Candanos, which reflects the continuation of ancient Candanos. The place has been given a prehellenic name which means "Town of Victory"

On the top of the hill. on the spot called "Barbadossa" or "Patela" there are extant the remains of small church of Aghia Irini. The hill had been split into two by an earthquake; on the SE side we can see the ruins of ancient walls, tombs etc, that evidence the antiquennes of Candanos.

During Venetocracy there lived many Venetian lords; most of them had been islamized and subsequently became the cruelest janissaries of Selino. During the Turkish occupation, Candanos was a real center, with the <strong>"seraglio", the seat of administrative and military authorities, where the Kaimakis (prefect) used to live in.