Leaving Candanos towards Paleochora, if we turn to the left, after a short distance we approach the village Azogires (76.5km). On this spot there ‘lives’ the evergreen Platanos (Plane-Tree) of Agioi Pateres; That plane tree has been declared by the Environment Protection Service as a preserved monument of nature. Its branches are arranged crosswise.

According to tradition, the 99 Agioi Pateres(Holy Fathers) sat down and had some rest on a stone which is built-in in its trunk. The Holy Fathers had come from Egypt, Cyprus and Attalia, in 1300 A.D. via Cavdos on a sailing ship and disembarked at Gianiskari.

However, Agios Ioannis the Hermit crossed the waterway opposite be using his capote as a boat and his staff as an oar! Initially they had lived in the cave of Harakas but later on the Chief of Selinou Kriaris built for them the Holy Monastery of Agioi Pateres, in which the historical museum is hosted nowadays. Even later they shifted to the cave Zoures; Agios Ioannis moved to Gouverneto af Akrotiri. Here they lived as hermits and died simultaneously with Aghios Ioannis, who was killed by a nearby villager whos saw him in the night, took him for an animal and killed him.

In the Zoures cave there are stalactites and stalagmites, a fountain and a Communion Table. It is said that the cave expands to a considerable depth. On the opposite site there are the famous carved caves of ‘Karali’ on a 30 meter high inaccessible rock. They comprise 3 rooms (most probably tombs), aperture, gutter- that ends to a stone basin for the filtration of a rain water – and a well.

The Monastery Archimandrite Gabriel Papagrigorakis using a rope and basket lifted the women and children up there to protect them from the Turks. There are also cyclic walls on the hill Tsounos. On its top there is a tomb and the famous greek ‘spiliari’ with graves on the floor as well as above the ceiling. There are the cyclopean and necropean walls. It is said that, at the location Loutra, there had been the old Achaia, the first capital town of Cecrops. 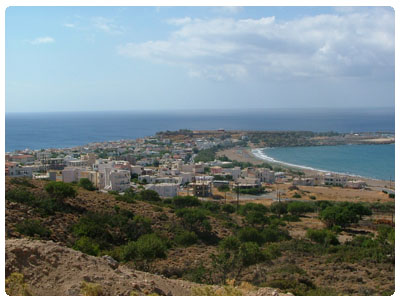 Paleochora, Completing the travelling impressions and information of this course, we eventually reach Paleochora (73.5km) There is daily communication with Chania effected by 7 bus itineraries. One passing through Candanos and another via Vouta- Strovles. Here there are a high school, hotels, restaurants, furnished rooms to rent, camping sites and various other entertainment centers.

Second to Ierapetra it is the most important major town on the south side of Crete. Summer and winter alike, visitors to Paleochora are given the chance to enjoy the pleasures offered by both the sea and land.

It is very rich in medieval and Byzantine monuments. According to its history, the present valley of Paleochora used to have been below sea level and the elevation of the fortress had been as islet. As a result of elevation of west Crete and the alluvions that followed, the sea bottom has become fertile land.

At the location of Paleochora today, there used to have been the ancient Kalamydi. In 1282, the then duke of Crete, Marino Gradonico built the castle and named it Selino. The entire province has also been called after Selino.

Gavdos – The island of Calypso

Gavdos is the most southerly point of the Greek territory. It is shaped like a triangle 5.5 miles long and 3 miles wide. It is rocky, treeless and at a distance of 20 miles from the beaches of Sfakia. The only trees that grow here are several fig trees, carob trees and cedars which are indigenous. Their seeds, the cedar cones, are considered to have ‘fertility attributes’ and draw many childless Cretans to the island for the purpose to bear children. It is believed that Gavdos or Ogygia is Calypso’s island, the one on which castaway Ulysses and his crew sought refuge. There is a cave on the north side of the island near Errikia which legend says is the place in which the cunning castaway spent seven years.

Starting our forth trip from Chania, we take the road towards the province of Cydonia, with a first stop at the village of Agia(9km), synonymous with this village of Agia of Mylopotamos, Agia of Larissa and a few others. The name of the village comes from Arabic word ‘agia’ which means ‘waters’. The water in this area is plentiful, coming from many good spring whose water from the tributary system of Platania, called Xekolomeno.

During the second Byzantine period the coastal Dioceses were transferred to inland sites for reasons of safety. As part of this project, the Diocese of Cydonia was moved to Agia. Subsequently, the diocesan church of the Virgin was built on the ruins of an ancient temple.

Continuing our journey we reach Alikianos (12.5 km) which is among the most beautiful of the orange growing villages. It has a post office, police station, magistrate’s court, petrol station and tavernas. The village was plagued by malaria but now it is a healthy village and a wonderful summer resort.

Descending from Koustogerakos, we reach Sugia (67 km) which is located on the site of ancient Syia and is now a rather recent place of dwelling. Excavations have revealed the remains of a roman aqueduct, in Syia, to which the water of spring from the village Livadas was brought.

Recently has also been found an early Christian basilica built in compliance with a dream Antonia Kantanoleon had, after the withdrawal of the Germans, according to which dream someone told her to dig in a barren field, at a distance of 125 metres from the sea. It was true. They dug and found indications of a structure. Then regular research was conducted by archeologists. Its dimensions are 16.75 by 12.40 meters and it has rich mosaic decorations.

It is possible for the visitor to take a small boat from the port of Sougia and go to Paleochora or to Agia Roumeli, the terminus of the Gorge of Samaria. By road one can pay a visit to the ancient Lissos, where worth seeing are the Asklepion (Aesculapian temple) the ancient theatre and the bathing facilities.