Central Greece; North of the Attica peninsula, the mainland widens into an expansive landscape stretching from sea to sea- a section of rugged mountains, deep ravines, fertile valleys and coastlands that remain undeveloped.

Being geographically close to the Balkans also means that central Greece stands out in terms of its culture. A historic crossroads of different traditions, ethnicities and languages that was also under Ottoman rule for almost a century even after Hellenic independence, it is no surprise that central Greece has been endowed with a more eastern, exotic patina than the rest of the country.

Central Greece comprises three distinct regions: Thessaly in the east along the Aegean; mainland Greece in the south along the Gulf of Corinth: and Epirus in the west along the Ionian coast. While far less of a tourist hotspot than Athens and the islands, the middle of the country does have its attractions with its pristine beaches and famous battlefields, ancient ruins and Orthodox monasteries.

Playground of the gods

Although the grandest and most celebrated temples and churches were erected in Athens and other major cities, in many respects, central Greece remains the nation’s religious heartland. Much of Greek mythology unfolds in the mountains, forests and caves of this region. This was also home to the Oracle of Delphi and the scene of the religion-inspired Sacred Wars that plagued Greece during the 6th century BC.

One of the most storied places in the Mediterranean, Delphi was a place of spiritual pilgrimage for more than a millennium. The ancients believed that the summit of Mount Parnassus was the home of Apollo, and they would tried to the lofty shrine to pay homage to the god of healing and prophecy and pray for good health or a vision of their future.

The famed Oracle (a senior female priestess) was the medium through which Apollo delivered his missives. Today, Delphi is a modern town and a UNESCO World Heritage Site. The well-preserved ruins include the sublime Temple of Apollo, as well as an amphitheatre, treasury and a circular tholos structure: many of the marble and metal artifacts discovered at Delphi are on display at the site museum.

Whether it was due to its sacred roots or the region’s rugged topography, central Greece endured as a spiritual hub for several thousand years, even during the dark days of the Ottoman occupation. 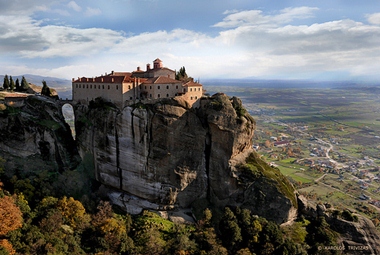 Mountainous retreats such as Meteora and Hosios Loukas enables Greek Orthodox monks to escape both their Muslim overseers and the temptations of the secular world, preserving not only their deep faith but also Byzantine art and architecture.

Although the 21st century made its presence strongly felt during the 2004 Olympics, much of the region remains lost in time. Traditional Greece thrives with its plethora of cobble stoned villages and farms, with natives who would most likely list their occupation as farmer or fisherman rather than banker or business man.

A world away from the crowded beaches often associated with cosmopolitan Greece, the central Greece region offers an unadulterated insight into native Greek lifestyle.

On the far side of the mountains from Delphi is the Fthiotida Coast. Popular with local vacationers for its hot springs, this natural spa location is virtually unknown to foreigners, who usually limit themselves to the Greek islands when looking for a seaside sojourn. Athenians flock to this coast on weekends and during the August holidays, as it tends to be less crowded than other destinations, and is also easy to reach via the Athens-Lamia motorway.

Despite its proximity to the sea, Fthiotida is primarily mountainous, with ancient footpaths that lead the intrepid traveler to unhindered panoramas. The area also boasts a myriad of local culinary delights, including mizithra cheese, kourabiedes almond cookies and trachana dumplings. Adding to its appeal to outdoor sports enthusiasts, Fthiotida is one of the few places in Greece that offers the alluring possibility of experiencing sand, sea and snow in a single day. Brilliant white sand beaches such as Livanates are only a short drive from the slopes of the 2,450 meter (8,000 feet) tall Mount Parnassus. 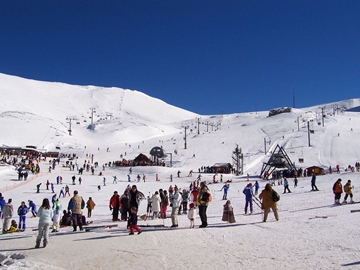 The snow season lasts only from December to April, but the mountain is home to the Parnassos Ski Centre, Greece’s largest venue for skiing and snow sports. Anyone who makes light of the skiing opportunities in Greece should consider the fact that the International Ski Federation (FIS) schedules regular slalom, giant slalom and snowboard events on this peak; points earned here count towards the world championships.

Although trendy young Athenians dominate the area, the winter party scene is a cosmopolitan one, especially in the mountainside village of Arachova with its crowded tavernas, bars and music clubs.

Surrounded by olive groves and vineyards, Atalanti is the agricultural hub of the Fthiotis prefecture, and the home of several prominent winemakers, whose artesian vintages have taken the world by storm. Also on the coastal strip between Mount Parassus and the Euboean Gulf are a number of sandy beaches and the charming town of Agios Konstantinos, a main ferry port from which to access the nearby Sporades Islands.

The region is not without ties to ancient myths and genuine history. Thebes, the second largest city of the Boeotia prefecture, was the legendary birthplace of Hercules as well as the city-state ruled by the tragic Oedipus of Greek drama.

The narrow pass at Thermopylae is where the Greek army, led by King Leonidas and his 300 Spartans, made their heroic stand against the Persians in 480 BC. As a tribute to the Spartan King’s bravery, the once bloody battlefield is now marked by an imposing statue of the Spartan commander next to a burial mound.