Two forces have shaped the face of modern Zakynthos: the more than three centuries of Venetian rule that helped to mold its architecture and its culture,and the earthquake of 1953 and the fire that swiftly ensued, which seemed to reduce this heritage to a pile of rubble.

Zakynthos town, on the east of coast of the island, has a very Venetian air to it: the campanile and basilica of Agios Dionysios, named after the island's patron saint, almost appear to float on the left side of the harbour as you approach on the ferry. This 20th century church was one of the three buildings in town that survived the earthquake, its chief treasure is an ornate sarcophagus holding the preserved body of the saint. 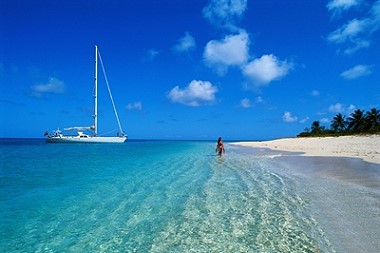 St Mark's square is much more intimate and more commercial than the Solomos Square. Pizzerias, restaurants and boutiques keep lively company with the serene forms of the Solomos Museum and the Catholic church. The former contains the sarcophagi of Solomos and Andreas Kalvos, along with literary memorabilia.

A comfortable, inexpensive hotel in this area is the Diana, with its cool lounge, while Strada Marina, on the waterfront, is the town's swankiest, with a swimming pool and roof garden.

Other landmarks near Bokhali are Lofos Strani, where Solomos composed his famous ode, and Akrotiri, a thickly wooded headed where imposing villas can be spied among the trees. The Quartetto di Zante, where the locals go to hear cantades, lies at Stavros, the junction between Bokhali and Akrotiri.

Zakynthos is well orginezed for exploring. You can choose between public buses or tour buses, rented cars or motorbikes, depending on your preferences. The closest beach to town heading north toward Akrotiri is the National Tourist Organization bathing pavilion: the most famous beach, Laganas, lies in the opposite direction on the southeast coast past the airport.

Though the Blue Caves in the north of Zakynthos have received more publicity, the island's west coast is lined with spectacular, stark white limestone cliffs. Boats are available at Laganas and Keri harbour to take you to visit the grottoes and the miniature beaches at their fringes. Even the locals never tire of the sight, especially at sunset. 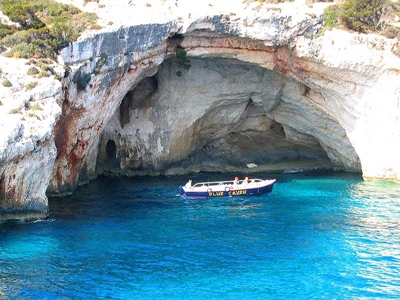 The eastern portion of the island consist mostly of gentle hills and fertile valleys that still produce the currants the English doted of the centuries. The area sprinkled with farms and villages where tourism is barely noticed.

Another favorite destination for both tourists and turtles is the string of beaches on the peninsula that juts eastward just below Zakynthos' town, topped by mountain Skopos, Zakynthos' highest mountain.On the way out of town toward Argassi you pass two typically Zakynthian stone churches and Karavomilos, one of the island's best fish restaurants, a bit classier than a taverna and more expensive because of its specialty. Further out along the cape in among the thick pine woods, olive groves and cow pastures, one lovely beach follows the other.

There are daily flights form Athens and some from Kefalonia as well as some charter flights from some European cities. Ferry boats run from Kyllini on the Peloponnese. Inter Island connections are via Kefalonia: five flights a week and by ferry between Pessada and Argostoli on Kefallonia and Ag.Nikolaos Bay (Skinari)in the North of Zakynthos.