The island of Naxos is the largest island in Cyclades and by far the most fertile among them.

When Mykonos got too crowded, purists headed for Paros, sweetly similar. When Paros suffered the same fate, they crossed the six mile strait to Naxos, tartly dissimilar.

Now Naxos is equally crowded, although, as is always true in the Mediterranean, only near the sea.

Since Naxos, by far the largest of the Cyclades, is composed mostly of mountains, isolated villages, and fertile valleys, even in season it is easy to escape the hectic town.

A continent in miniature, Naxos especially beckons the hiker, the Medieval-history buff, and the lover of Byzantine art - 130 churches with wall paintings have been investigated so far.

It has some of the Cyclades' best beaches and many restaurants and hotels that attract a farrago of visitors, from hiker Germans to biker Italians to nudist Scandinavians to rowdy English to rich Athenians. 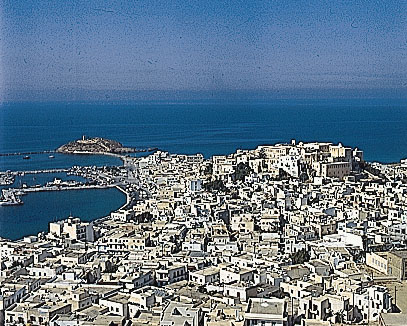 As the boat approaches the docks at Chora on the island's west coast, you will see two holy places. One is the immaculate white chapel on one islet built into the Venetian dock in 1707, but now separate, dedicated to the Virgin of Myrtle. The second is the great 21 1/2 foot high gateway (called Portara) to the Temple of Apollo, which has become the emblem of Naxos. The Naxians call this temple, on a second islet accessible by a causeway, the Palatia.

North from the Palatia along the coast lies Grotta, once a large Early Cycladic (after 3200B.C.) community settled by Jews in the 16th century A.D.

The town of Naxos, where 3,000 of the island's 14,000 people live, feels like three or four towns jammed together: the port, with its bustle and dilapidation, cafes and tourist services; the borgo with its narrow winding alleys, better shops, and old restaurants; new Agios Georgios, which looks like Piraeus suburb but is full of shops and eateries popular with the Greeks and kids from the beach; and the crowning Kastro, a serene, preserved Venetian hilltown.

Though the town is officially called Naxos, most maps and residents call it Chora. And while not fresh and pretty, Chora is not dull; in fact, there may be more to explore here than in any other town in the Cyclades.

Start your tour in the main square, toward the northern end of the waterfront near a shop that sells the sweet citron liqueur distilled from Naxos lemons. Take the main street to the right, up to the church of Profitis Ilias, built by the same Duchess Crispo. Inside are two excellent icons by Angelos of Crete, who taught Domenikos Theotokopoulos, known elsewhere as El Greco.

The 13th-century Catholic cathedral is built on the Kastro's uppermost square. Near the church are the massive Ursuline Convent, once renowned but now closed; stately gardens and mansions; and the French School, built in 1627, which now houses the Archeological Museum. The school's most famous alumnus, Nikos Kazantzakis, later wrote Zorba the Greek and The Last Temptation of Christ; in his autobiography , Report to Greco, he praises highly the education he received here.

The Archeological Museum of Naxos rivals the museum on Delos for the best collection of antiquities in the islands.

Naxos' inland scenery, with its dramatic mountains, suddenly revealed valleys, distant villages, and rich gardens, surpasses that of the order islands. There are two main routes to take by vehicle to get an idea of the richness; to the Melanes Valley just east of Chora, and to Apollon through the central mountains and back along the north coast road.

Best Beaches of Naxos Island are: 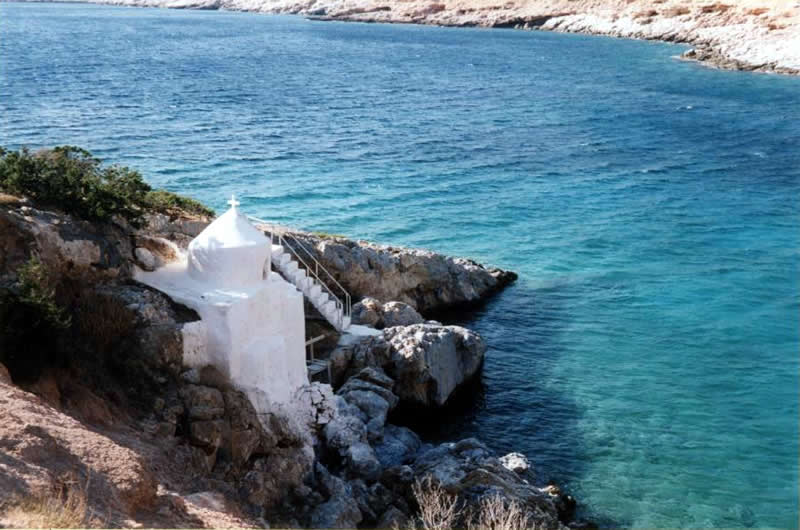 The road south from Chora down the western side of Naxos leads to fine beaches, all protected from the north wind and all with their own tavernas. The first, before the peninsula, Ag. Giorgios is overdeveloped; the second Ag. Anna attracts nudists; then comes Ag. Prokopios, beautiful despite many new villas; Mikri Vigla, where expensive bungalows are for rent; Kastraki, also with villas to rent; and Aliko long, sandy and with superb views of Paros.

Then comes Pyrgaki Point, where there is a large, isolated resort overlooking, the long beach. Despite such development these beaches are often uncrowded. Lord Byron liked to swim too, and Naxos was his favorite island, where he wanted to settle forever.

In summer three or four ferries a day from Piraeus stop at Naxos; fewer make the trip off-season. The voyage takes seven to nine hours, depending on season, weather and stops (boats always stop first at Paros, sometimes on Syros.

Buses go to nearly all Naxos' many villages. The schedule is posted at eh main stop on the quay near the boat dock. Beach roads are jammed during the summer. Many cars and motorbikes are for rent; since Naxos is the biggest and most mountainous of the Cyclades, choose with care. Many taxis wait on the quay.

Villa Marandi in Naxos Island Not rated yet
We are ideally situated on a quiet sandy beach, overlooking the sparkling Aegean Sea and only a short distance from the main town, Hora. Villa Marandi, …