Voulismeni or Vromolimnos, the depth of which reaches 64 meters.

As a new city Ayios Nikolaos has not many sites to offer. The most important one is the fascinating salt lake which is connected with the Merambellos bay through a narrow channel. Its general appearance gives the city a different tone which reminds us of other districts of our planet.

The area has unimaginable details of climate proportions (0 humidity) with a clear atmosphere, which make the sun, the moon and the stars shine strangely. In recent years it has become an international tourist center since in its streets most of the world's races pass up and down. Tourist period starts from April as foreigners arrive in, crowded groups, in order to enjoy not only the natural beauties but also the luxurious hotels, up-to-date camping, the hospitable furnished flats and the hundreds of restaurants, tavernas, dancing places, parallel to the civilizing demonstrations that take place in summer throughout the prefecture. Ayios Nikolaos took its name after the little church with the same name situated on its north side and which is one of Crete's oldest churches, with wall paintings of the 8th and 9th centuries after Christ. The city is built on top of Lato to Kamara, which was the harbor of the city Lato Etera situated at the location of today's Goula, near Kritsa.

The first step towards its touristic development was made in 1963 with the construction of the big hotel unit Minos Beach . Ayios Nikolaos is full of rich alleys but it also disposes a port for ships of small displacement. In its southeastern side, during the Venetian domination, a fortress had been developed for the protection from the sea; yet today there is not a single sign of it.

The city disposes an Archaeological Museum. It is situated at 68, Palaiologou Street. It is with regards to the uphill road when leaving the quay and heading to Heraklion. It has been operating since 1970 and among its exhibits are also included archeological things found from the Neolithic up to the Roman period, discovered in various districts of the prefecture. 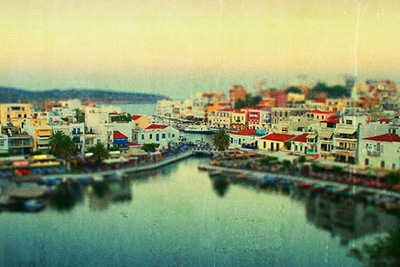 Voulisma, 12 km , or take the the northern direction to arrive at the Elounda sea shore with the big hotel units. At a distance, there is another sandy beach called Plaka where people are few.

For sailing the visitor may rent a wind surfing in the of Elounda, while he may play tennis in the tennis courts of the big hotel unit of that area.

All coasts of the prefecture offer for fishing while from the point of view of hunting there is a lot of game in partridges and hares. In the town, there are plenty of restaurants, tavernas, bars, pubs, discos, country places with Cretan music as well as cinemas. 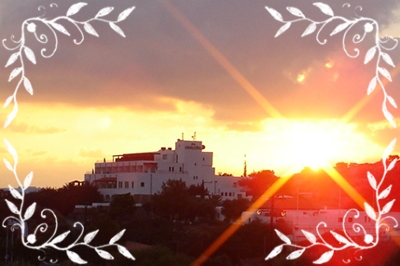 With Ayios Nikolaos as epicenter, the visitors may visit various locations in the suburbs that present a special interest, such as the plateau of Lassithi windmills left, the village Kritsa, famous for its Cretan woven stuff and embroideries, Panayia i Kera with its unusual architectural style which is composed of three declinations etc. 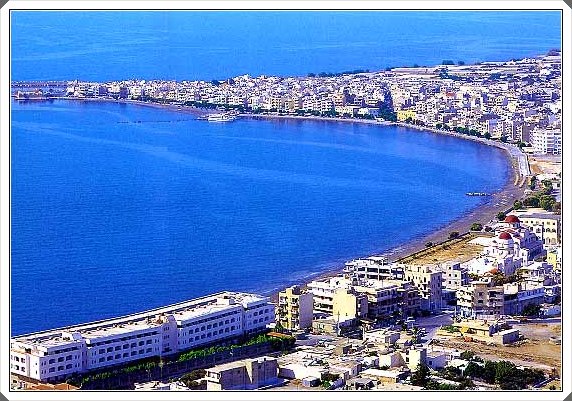 Ierapetra is being considered as Greece's vegetables garden. It is the most crowded town in the prefecture while its sea shore(Libyan Sea) are far only 230 sea miles from the African coasts. Its climate is mild and dry while from here passes the 35th parallel of the earth.

In this area, sunlight lasts almost all the year, whereas the average annual temperature is 20 degrees. Even in winter Ierapetra can be a place for vacations because it disposes many hotels, restaurants, tavernas, cinemas etc. From ancients times, in this region cutler making has been developed with the famous "Ierapetritika knives".

From Ierapetra, the road continues coast-wise towards the east, with superb coasts to admire till the bay "Kalo Nero" (61km) where there is a camping site. The road junction to the northeast leads to Sitia and eastwards to the ravine of Perivolakia (105 km).

The coasts of the Lassithi prefecture exceed the 250 km in length and the most significant thing is that almost all of them are accessible even by car. Only a few points are difficult to be reached.

When entering the Lassithi prefecture, from the western side, there is a secondary thoroughfare which with a parallel to the coast course, runs about the peninsula as far as Ayios Nikolaos.

Have you ever been to this island? Share your story with us.

We would love to hear about your best experiences, your most interesting information on this Greek island, your top travel tips or anything about this island that you'd love to share.