Hydra Island is a long, thin, dry rock, 1 miles long and only about 4 miles wide. Its beautiful harbour is one of the gems of Aegean, ringed by tiers of 19th-century buildings, many of them impressive mansions built by shipping wealth. Although there are many shops, mostly along the waterfront, good sense has been used in tastefully restoring many of the old houses and in maintaining the island's traditional appearance.

The history of the island is dominated by one short period in the late 18th and late 19th centuries when Hydriot captains were occupied in international shipping, gaining the seafaring expertise and money that they used against the Ottomans during the Greek war of Independence. The captains built the large grey mansions known as archontica, all constructed in the early years of the 19th century, designed by Italian architects and built by itinerant Greek workmen from the central Peloponnese, Epirus, Pelion, and Tinos.

Hydra town forms three sides of a rough rectangle around the harbour, with the sea to the north. The ships and Flying Dolphins land of the east side, and the Flying Dolphins ticket office is just up the road from the harbour in the southeast corner. 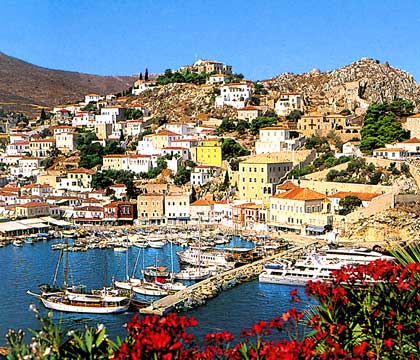 If you plan to stay on the island, make reservations at the small Orloff Guest House, managed by Irene Tragea, approximately 80 yards up the road from the harbour's southwest corner. The term guesthouse is apt, for staying here is like visiting hospitable friends in a tastefully restored old island mansion. The rooms are air-conditioned and have fresh flowers, and most unusual for Greece, the windows have screens. A complete Continental breakfast is served in the enclosed garden, lined with honeysuckle and bougainvillea.

The Miranda Guest House is also a restored island mansion, not quite as attractive as the Orloff but a good second choice. To reach it, turn up the road just before and parallel to the road leading to the Orloff Guest House.

In general, the better dining spots are away from the harbour, several of them up from its southeast corner. 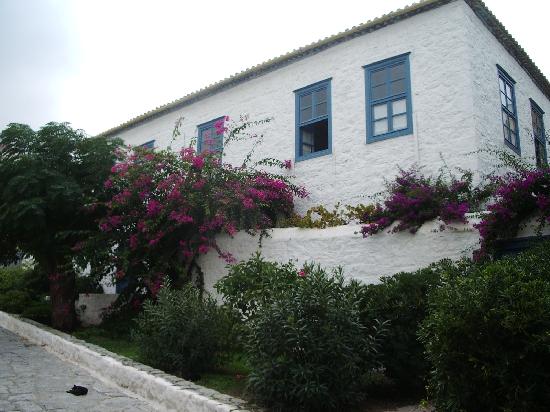 You can swim almost anywhere along the shore, but the most pleasant places are at the farthest hamlets of Palamidas and Molos, down the coast of the southwest, where the sandy beaches are usually less crowded. Arrange with one of the caiques or boat taxis to take you down and pick you up (no cars or motor bikes are permitted on the island)

You probably will spend your time on Hydra Island near the shore, but there are six monasteries on the mountain and a small, hidden, fertile valley known as Episkopi above Molos.

The monasteries, which date from the 18th and 19th centuries, are unusual in that they are on an island so close to the mainstream of modern life yet remain so far removed.

Regular ferry boats make the 3-hours-and-15-minute trip from Piraeus to Hydra twice each day during the summer. The Flying Dolphins and the large catamarans, which leave from the Zea harbour of Piraeus, take only an hour and 50 minutes, and make many trips each day.

No cars or motorcycles are permitted on the island, but you can easily get around by taking a caique or a water taxi. The small caiques, which are slower and far less expensive than the water taxis, leave from the center of the southern side of the harbour. The water taxis depart from the southeast corner.