Returning and taking the second route from Alikianos (12.5km) and going east of the bed of the Platanias River, we reach Fourne, (14,7km) on the way to Lakki-Omalos. From here a road leads to Meskla (20.7km) at an altitude of 200 metres. This village is famous for its handsome men, just as the village of Therisso is for its beautiful women.

This village figured in the bloody Kantanoleon’s uprising. After the tragic end of the rebellion, the Ventian governors seized animals and possessions from the inhabitants and divided them along the soldiers, then they razed and burned the village so it would be wiped out from the face of the earth, while on its hillocks they hanged up 1/3 of the rebels.

At the lower end of the village is the church Christ the Saviour with frescoes painted by the brothers Theodore and Michael Veneris in 1403. However, there are in a very poor condition. Nearby is the church of Assumption of the Virgin built on the spot and with the materials of a Helleno Roman temple of Panclemos Aphrodite. Around the village there are extant impressive remains of cyclopean masonry of a considerable length, the latest part of which date back to the 4th century.

Now we must turn back again to Fourne and follow the road that leads to Lakki and Omalos.

The village of Lakki (28.5km) is on the north slopes of the White Mountains at an altitude of 500 metres. The name comes from the pits which the first inhabitants dug in order to provide water for their livestock. However, traditions tells us that the village was built by the rebels Kokkos, Theodoros and Bibos from Ai-Gianni in Sfakia.

The people of Lakki are still an example of Cretan generosity and bravery as they fought against the Venetians and Turks many times in attempts to keep their freedom. They even reached the point of setting their own homes ablaze, in 1866, when the Turkish soldiers entered their village, for the purpose to humiliate their enemies. 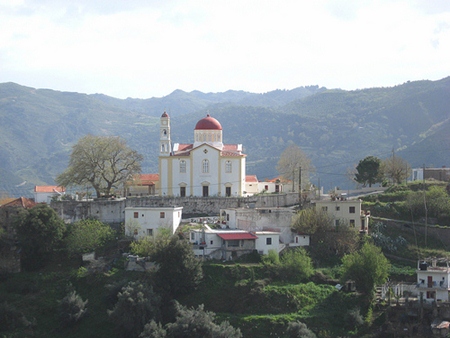 Continuing on our way we reach the Omalos Plateau (38.7km) at an altitude of 1080 meters. It lies among the provinces of Cydonia, Selinou and Sfakia. It has the form of an irregular circle with a diameter of 4 km and an area of 20-25sq.km with 6000 stremmas of cultivable fields. It produces wheat, barley, and potatoes. It was here that brave young Cretan men first sang the song ‘When will the clear skies return?’. These were the men who disregarded danger and gave their all in the fight against the Turks. On the hillock of Agios Panteleimon of Omalos, to the right as we enter the plateau, there is the grave of Hatzimichalis – Giannaris, who had been a leader of the cretan rebellions and president of the Cretan Government, during the period of autonomy. To serve the visitor, there are hotels and restaurants.

Xyloskalo also marks the beginning of the Gorge of Samaria which terminates on the coast of Agia Roumeli and into the Libyan Sea. From Xyloskalo to the Gates of Agia Roumeli the distance is 18km and walking time is about six hours, depending on the strength of the visitor. The Gorge of Samaria

Generally speaking The Gorge of Samaria(National Woodland) is a real pole of attraction for the tourists. Beautiful as well but of minor significance are the gorges of Therissos, of Imvros, of Agia Irini at Selino etc. These gorges created in a wild nature are therefore called the 'Temple of Crete'. The Gorge of Samaria is the biggest and most imposing one in Europe. The visitor is really enraptured with its view. It was for its beauty and grandeur, on 18th April 1980, that it gained the A-Class prize awarded by the European Council.

At a distance of 2 km from the inlet to the gorge we find the chapel of Ag. Nikolaos. The chapel is surrounded by cypresses- with a trunk girth of 6.5m- which are deemed to be sacred and therefore, they are not cut down. According to tradition, in ancient times, rough cypress timber was exported to Egypt for the construction of coffins; on the other hand here in Crete, such timber was used for the construction of pillars intended for the Minoan palaces in Knossos, Festos, Tiryns and Mycanae.

A permanent 'inhabitant' in the area of Samaria, as well as on the other inaccessible summits of the White Mountains, is the Cretan Wild Goat. It has been the sacred animal of the Cretan goddess Artemis(Diana) of Diktina, as it appears on a tombstone column exhibited in the Archeological Museum in Chania, as well as on sides of coins pertaining to ancient towns in West Crete.

Certain people call these wild goats 'kri-kri'. However, this is all wrong, as there is not such nomenclature in the fauna of Crete.

Beyond the natural existence of the Gorge, there is also its historical presence: in 1770, after the fail of Daskalogiannis rebellion, a few thousands of women and children from Sfakia sought refuge to the gorge for their survival. The Turks were informed for that and rushed to capture or annihilate them. The chieftain Giannis Bonatos, together with 200 Sfakian men, were lurking around the Portes(Gates) and, just with insignificant losses among men, he caused a real disaster to the Turks who ran away for their lives.