Aegina Island is the nearest island escape from the Athens metropolitan area. It is a mountainous island, mostly slopes that are not steep, and the north and east coasts slide gently to the sea. Here you can enjoy a taste of Greece's ancient, Medieval and modern history as well as eat in seaside fish tavernas and swim off gentle sand beaches.

Aegina town, on the west coast of the island, is a harbor town that has not yet decided between its 19th-century past and the advantages of modern concrete. So many ferry boats and Flying Dolphins come in from the Athens-Piraeus urban conglomeration that is is almost an extension, yet it maintains its island ways for all its urban bustle. Notice the 19th-century buildings built when Aegina Island was the capital of newly independent Greece.

Most of the town's enterprises are right on the waterfront, facing the moored yachts and caiques: restaurants, tourist shops, travel agencies, bakeries, banks, groceries stores, the magazine and paper bookstore, and the fish market. Down from the boat landing, near the large church of the Panagitsa, there are often small vegetable stands; several caiques act as grocery stores as well, bringing vegetables over from the Peloponnese and selling them along the quay.

Aegina Island has extensive pistachio orchards, and bags of locally grown pistachios are for sale all along the waterfront. Buy your fresh bread from the small bakery between the fish market and the church of the Panagia. You can swim either at the town beach just north of the main dock or, more pleasantly, off the rocks at the lighthouse. 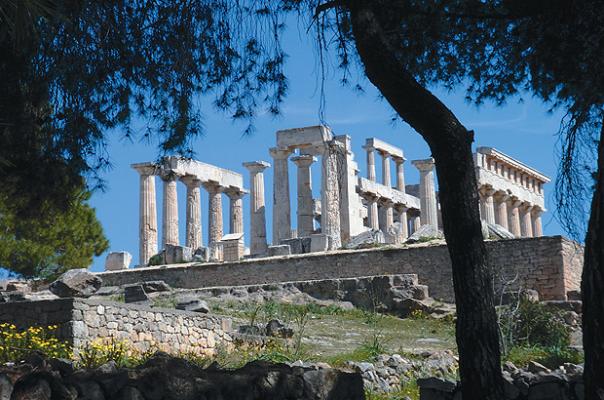 On the rocky slopes across the small valley from the monastery of Ag. Nektarios are 38 churches, all that remain of Paleochora, the old town built by the islanders after Aegina Island was sacked in 896 by Arab raiders based on Crete. When Kheir el-Din Barbadosa made his butcherous raids throughout Greece in 1537 he did as much damage as he could to the town, and it was briefly occupied by the Venetians in 1654 during the lengthy fighting between the Venetians and the Ottomans. In the early 19th century the townspeople began moving back to Aegina town, eventually leaving Paleochora deserted.

Across the main road from the monastery of Ag. Nektarios and Paleochora, and higher than both, is the monastery of Panagia Chrysoleontissa (Παναγίας της Χρυσολεόντισσας), built early in the 17th century. The nuns who live here welcome anyone who makes the hour's climb (you can also spend the night). Most of the year the monastery is quite, but many people climb to it on August 15, the feast day of the Virgin Mary.

THE SANCTUARY OF APHAIA

Aphaia,meaning "invisible", was a Cretan-Mycenaean deity who fell into the sea while fleeing King Minos . Some fisherman rescued her and brought her to Aegina Island, but as soon as they reached the island, one of the fisherman pressed his advances. Aphaia fled again, and this time she disappeared. Her pre-Hellenic cult eventually merged with that of Athena. The Sanctuary of Aphaia stands 325 yards above the port of Ag. Marina, just south of the island's northeastern corner. Lines drawn from it to the Parthenon in Athens and the Temple of Poseidon in Sounio form an equilateral triangle.

Two temples, one dating from the seventh century and one from the sixth century B.C. were built on the site before the present temple was erected in approximately 490B.C. The fifth-century Doric temple had beautiful Archaic pedimental sculptures, most of which are now in the Munich Glyptothek.

Some fragments from the original eastern pediment, including heads of warriors, are in the National Archaeological Museum in Athens. This temple, on a lovely site, is one of the finest examples of Archaic architecture.

The little port town below the Sanctuary of Aphaia has become a thriving tourist center, buses making the 30-minute trip form Aegina town to Ag. Marina every half hour in the summer. Ag. Marina has more than 40 hotels, all of them relatively recent concrete structures. The sea here is cleaner than the other side of the island, however, so if you want to stay here consider either the Apollo or the Argo hotel, in that order.

Incongruous though it may be in such a setting, the Bonsai Japanese restaurant has excellent food. Take the Ag. Marina road all the way down past where it turns right to run parallel to the water, then make the first left leading down to the beach; the Bonsai is on the left.

Tables are set on a veranda beneath grape vines. The meat, fish and vegetable dishes are cooked smartly in light oil by your table. If you want to go on the opposite cultural extreme, try the Honey Tree, a real country taverna a short way out of town of the road to Aegina.

Perdika is a small fishing village on the island's southwestern point, its harbour a heaven for caiques and small yachts. The waterfront is lined with fish restaurants, anyone of which is a pleasure and far nicer than the restaurants in Aegina town. The Moondy Bay Hotel at Marathona, approximately 4 km north of Perdika, is a good bungalow hotel on its own quite bay, with a full complement of sailboats and windsurfers available for rent. Staying here and eating your meals in Perdika is a good strategy.

The best place to swim on Aegina Island is not in Aegina itself, but on Moni, the little island just offshore from Perdika. Small boats leave frequently for the ten-minute trip from Perdika to Moni, where you can either swim off the gentle sand beach or cross the headland to swim off the rocks.

Regular ferryboats leave throughout the day from Piraeus for a 90-minute trip to Aegina Island. Smaller boats, designated "Express"make the journey in about 75 minutes. Some of these boats go to Souvala as well as Aegina town, and some go to Ag. Marina.

During the summer the hydrofoils, known as Flying Dolphins,leave from the main Piraeus harbor for Aegina town and take only 35 minutes. You can get around on the island by taxi, bus, or moped.

The few taxis are most likely to be found waiting near the piers for passengers disembarking from the ferries or the Flying Dolphins.

The bus service around the island is good; the bus station is on the northern edge of Aegina town, just to the left as you come off the docks.