Greater Attica, an area of natural beauty, has been since antiquity one of the most important cultural center of Greece.

With important historical and archaeological sites, unique Byzantine monuments, mountains, fertile plains and clean beaches – all easily accessible from Athens- Attica is an attractive destinations for day trips, offering an escape from the busy streets of Athens.

Penteli is a densely mountain with springs and attractive locations. From the top, you have a spectacular view of the city as well as the Euboean Bay. Penteli is a well known source of marble, as the Pentelic Marble was the main material used for the construction of all attic architectural and sculptural marvels of the Classical period. The unique white colour of Pentelic marble was well known in antiquity and it also was an important export product of ancient Athens. Later it was used in the construction of the Panathenaic Stadium (Kallimarmaro), which was the location of the 1st modern Olympic Games in 1896.

Mount Hymettos is located south of the Athens basin. It is linked to the history of Athens. Sanctuaries have been built here since antiquity (among others, the sanctuaries of Zeus and Pan). Moreover, in the western side were marble mines. Marble was used for the construction of monuments in the Hellenistic and roman periods. Hymettos has abundant vegetation and a large variety of fauna and flora. In the past few decades, the state has introduced special measures to protect the important ecology of Mount Hymettos. Mount Hymettos is the most popular destination in the vicinity of Athens, combining natural beauty with a multitude of archaeological finds and important Byzantine monasteries.

Parnitha was first inhabited during the Mycenaean period; it always constituted a key point in Attica’s defence, as it was the most fortified mountain in ancient Greece.

Being the highest mountain in Attica(1,400m) and one of the most beautiful mountains of Greece, is is located 30 km northwest of Athens. Mount Parnitha’s National Park has an area of more than 300 square kilometres. 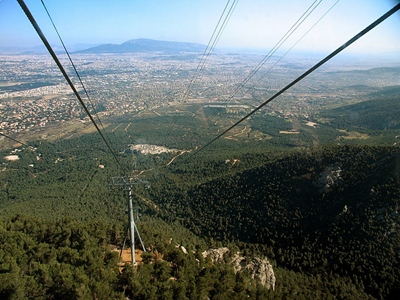 It is a home to 30 species of mammal (deer, hares, foxes etc) and 120 bird species (many of which are endemic); while more than 800 kinds of herbs and plants occur.

Walk one of hundreds of footpaths, take a mountain bike ride on a designated trail in the area of Agios Merkourios, explore dozens of small caves and visit a lot of beautiful churches, and monasteries.

Moreover one can visit the luxury hotel ‘ Mont Parnes’ and challenge his luck in the casino. The Mount Parnes Casino is open daily except Wednesdays. Visitors should wear evening dress and carry a valid passport. Visitors under 23 years of age are not allowed into the casino.

Well worth your visit is the Daphni Monastery (11 km from Athens, near the Haidari suburb, the Athens Corinth Highway), which is linked to ancient mythology, the classical period, and Byzantine history. The Monastery is thought to be the most important Byzantine monument in the Athens area, while the mosaics are thought to be masterpieces of the golden age of Byzantine art.

According to mythology, the location where it was built was named after the ancient temple and the laurel thicket. According to another myth, Daphni was named after Queen Daphne, whose boat was shipwrecked near the port of Eleusina. Queen Daphne was saved, and as an expression of gratitude to the god Apollo, she built the temple. The temple was later destroyed by the Goths. However, according to another myth, the place was named after the nymph Daphne, who escaped to the location from the god Apollo and was metamorphosed into a laurel bush. 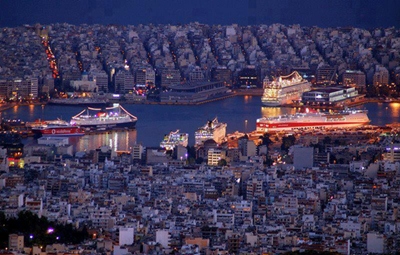 Most people have heard at least for once the greek song ‘‘The youth of Piraeus’’, composed by M. Hadjidakis, with Melina Mercouri singing in the film ‘‘Never on Sunday’’. However, many people don’t know the place, which the film and the movie made famous-the city and port of Piraeus.

Piraeus is encompassed almost on all sides by sea. The pace of life of Piraeus is linked to the sea. In antiquity it was an island. Travellers were ferried across to the mainland. That perhaps explains the origin of its name.

The architect Hippodamus designed the urban planning of Piraeus in the mid 5th century B.C. Hippodamus plans were used as the guidelines for the reconstruction of the city in 1834.

Today is the main port of Athens, the biggest port in Greece, one of the leading ports in the Mediterranean, an important centre of the merchant marine, industry and transportation. The centres of Piraeus are its three ports: the central port, the Zea marina and the Mikrolimano.

The sanctuary of Sounio (the famous temple of Poseidon is here) is the most important sanctuary of Attica. Situated at a unique site (cape Sounio) the sanctuary is one of the major sights of Greece. It is one hour’s drive from the centre of Athens (68km). The route to Sounio follows the coastline of Saronic Gulf passing through the tourist resort of Varkiza, Ayia Marina, Lagonisi, Saronida, Anavissos. Look out of the window of your car or bus and you will enjoy the sparkling blue sea.

If you travel by car you can stop and go for a swim in an organized beach or one of the beautiful little bays located at many places on your way.

You also will find a multitude of cafes, tavernas serving fresh fish and ouzo restaurants.

Located approximately 9 km northeast of Sounio is Lavrio, a small picturesque town with a multitude of neoclassical houses and mansions, which was famous in antiquity for its mines. The mines of Lavrio closed in 1970’s. Worth a visit is the Mineralogical Museum. At the seafront are a multitude of traditional cafes and fish tavernas, with delicious traditional snacks.

Excavations have revealed the most ancient theatre within the Hellenic territory, parts of the settlement, metal work facilities, a 4th century B.C. tower, cemeteries and a sanctuary of goddess Demeter. In the area encompassed by Lavrio and Sounio is the Sounio National Park, with natural archaeological and cultural attractions.

Located 23 km west of Athens, it was founded in the 2nd millennium BC; the sanctuary became pan-Hellenic in the 8th century BC. Today, the city has mainly industrial character with obvious however indications of its older attributes, such as the aristocratic houses of the early 20th century as well as the neighbourhoods with one-storey houses and the old industrial buildings. The district around the harbour, where ruins of the ancient breakwater have been retrieved, is also of great interest. However, uninitiated visitors will not appreciate its glorious past, the history and the mythology regarding the local gods, the deities and the worship thereof.

21 km west of Eleusina is the town of Megara. A significant town in antiquity, it is the birthplace of Euclides, Theogenes and Eupalinos. Its decline started with the end of Peloponnesian War. Its interesting archaeological museum houses terracotta and marble findings from the greater area, covering the chronological period from the 6th century B.C. till the Roman era. Among the most important exhibits are the terracotta bust of Demeter from the 5th century, a terracotta female bust, a spout with the shape of a lion’s head from around 350B.C. , a female statue wearing a peplos veil from 325-300B.C. etc.

One of the largest zoos in the Balkans spreading across 128000 square meter in the area of Yialou(Spata). A visit there is a unique experience especially for children. It consists of the ‘Ornithological Park’ boasting the third largest collection of birds worldwide, farm animals and large cages-miniatures of three continents; the ‘World of Reptiles’ with python, boas, crocodiles, etc; the ‘Greek Fauna’ featuring rare animals of Greece; the ‘African Savanna’ with giraffes, zebras, antelopes, jaguars, snow leopards, white lions, etc; the ‘Forest of Monkeys’ where visitors share the same space with monkeys; the feline section, the section with the hippopotamuses, alligators, etc. The zoo is open to the public daily from 9.00 a.m. until sunset.

Well worth your visit is Marathon, with its archaeological area and museum. Marathon is one of the most beautiful locations in Attica. 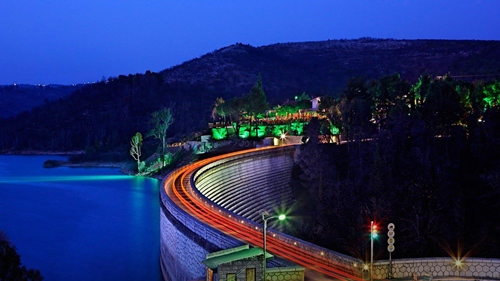 The way to Marathon is beautiful. On your way you will pass by fields, vineyards, olive groves, wild vegetation, as well as man-made Lake Marathon with its impressive dam with marble coating, built in 1929. All over this area you will find a multitude of beautiful beaches where you can swim and sunbathe. The most famous beach is Schinias (an exceptional beautiful location which has been declared a National Park, which has a pine forest bordering on the sandy shore. You can combine a visit to Marathon with a visit the archaeological area of Ramnounda.

The main source of information regarding the battle of Marathon is the ancient historian Herodotus. According to Herodotus, the Persian fleet disembarked 100,000 troops in Marathon in 490 B.C.

Facing this immense army were just 11,000 Greek troops. The Greeks thanks to the military genius of Miltiades, won the battle. Following the victory, Pheidippides, an Athenian soldier, was sent to bring the good news to the city. He ran all the way from the field of battle to the Market of Athens. He said one word: Nenikikamen(we won), collapsed and passed away. In memory of the event, the modern Marathon covers the distance Pheidippides ran, and is symbolized in the opening ceremony of the Olympic Games.