Spetses Island - The town is open and relaxed, with comfortable. although not luxurious, hotels and not enough tavernas, restaurants and beaches for a pleasant and varied stay.

The Dapia - the small harbour in the centre of Spetses town guarded by aging cannon next to the pier where the Flying Dolphins dock - is the town's congenial, bustling heart, with cafes, restaurants, hotels and the all important central kiosk. There are more than 200 hotels and rooming houses on the island, most of them in Spetses town. Restaurants are grouped in or near the Dapia, including those at Clock Tower Square, inland just a few blocks south of the Dapia, in the Old Harbour, and along the northwestern shore from the Posidonion Hotel toward the school.

On the several 19th century houses above the Dapia, note that pf Bouboulina, the famous woman admiral who, among other exploits during the Greek war of Independence, blockaded the Ottoman garrison of Nafplion.

The Old Harbour is 1,5km southeast of the Dapia, to the right as you face the sea. To get there you can take a horse-drawn-carriage from the small square adjacent to the Dapia and ride in style. If you choose to walk, take the right fork at the kiosk past the town beach and go straight up the hill past the Monastery of Ag. Nikolaos. The monastery was built in the 17th century, although extensive repairs have since been made; the white-marble campanile was built in 1905. The Spetses flag was flown from this campanile in 1821 to show that the island had joined the erupting Greek War of Independence.

The Old Harbour still provides safe anchorage for large sailing boats, and many 19th century mansions, most of them with pebble mosaics, overlook the harbour from the slopes. There are several pleasant waterfront restaurants, of which by far the best and the most expensive is Trehantiri, at the beginning of the harbour as you enter the Dapia. 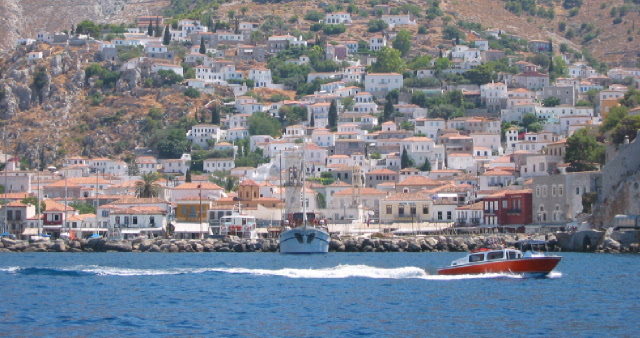 Some of the most visited places are:

For swimming, take one of the several large caiques that leave the Dapia in the morning with groups to Zogeria, Ag. Paraskevi, and Agioi Anargyroi, all of which have fine sand beaches.

Ag. Paraskevi tends to be less crowded, but Agioi Anargyroi on the west coast of the island, has two summer tavernas. You can get there expensively by taking a water taxi or reasonably by taking a regular taxi. You can reach Ag. Marina on the east coast, by an easy 30-minute walk or by bus from town.

If you want to swim without any crowds, arrange with a water taxi in the Dapia to take you to and pick you up from any stretch of coast you like.

If you rent a motorbike you can get around the island on your own and, if you're lucky, find an unoccupied cove.

Katerina Hair, Nail and Wax Studio in Spetses  Not rated yet
Professional hair, nail and wax artist, Katerina offers a wide range of treatments from head to toe. Katerina’s hair salon is in the area of Kounoupitsa, …