Though Skopelos Island lies only a few nautical miles east of Skiathos, it is completely different in character - and far less commercialized .

Living up to its name , which means "a huge rock piercing the sea"it has steeper mountains and more precipitous shores. Skopelos's easily accessible beaches can be numbered on two hands, but has 360 churches and 40 monasteries scattered among its thick green forests; 123 of the churches are tucked away in the capital-port alone.

One of the best ways to start your explorations is to climb up to steps on the extreme right of the port as you face inland, passing three exquisite churches, each older than the one before.

Though you can easily lose yourself in the back streets as you wend your way down, there is no risk of getting really lost. As in Skiathos, all the essential places you need are located on or near the waterfront.

The side streets just off this part of the waterfront abound in beautiful shops, offering clothes and handicrafts of a distinction rarely found in tourist resorts. 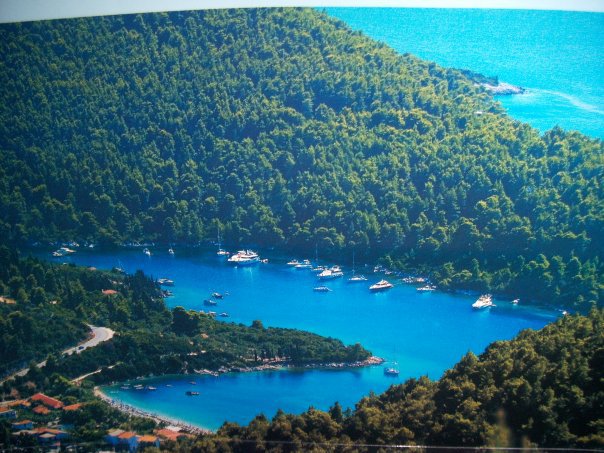 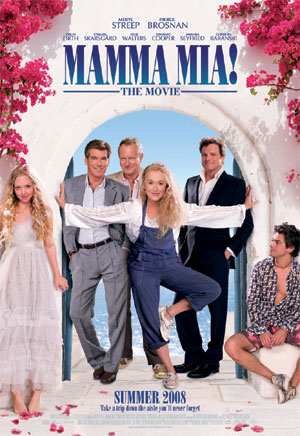 The film of Mamma Mia!, the hit musical based on the songs of ABBA, was shot here in September 2007 and it was of course a great success.

So most of the scenes from Kalokairi island with the beautiful beaches everyone has seen in various scenes, have been shot in this part of the Skopleos Island.

Of course Skopelos has beaches too. There are best reached by excursion boat from the port or by bus. The first stop going clockwise around the island is Stafylos beach, a very pretty cove on the south coast that tends to get very crowded.

Stafylos is named after the legendary Minoan prince whose reputed tomb was excavated in the vicinity in the 1920.

Milia is considered the island's finest beach. One of its three silvery crescents lined with trees has a taverna. 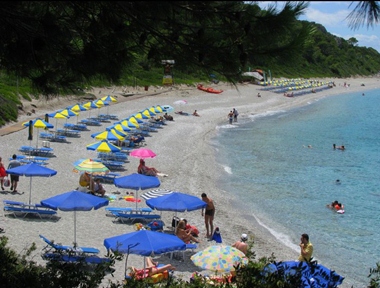 Visitors to Skopelos may wish to take advantage of the airport facilities at Skiathos. Both the island's ports - Glossa and Skopelos town - are served by the same boats as Skiathos. Flying Dolphins and Flying Ikaruses leave the mainland from both Volos and Agios Konstantinos. Ferry boats also serve both destinations from Volos and Agios Konstantinos.

To get around the island itself, you can rent a car or scooter or take the convenient public bus, and you can use caiques to reach the most popular beaches.

Watch this interesting video that Carl Yates shot while on a family holiday in Skopelos.

''Skopelos is island in Greece. Such a beautiful place.'' - Carl says.

Mostly shot on a Canon 60D with a variety of Sigma, Canon and Tamron lenses. The underwater footage was shot on an Olympus u Tough - 3000.

VILLAVIEW NEAR GLOSSA, SKOPELOS Not rated yet
PRIVATE 3 BEDROOM VILLA WITH LUXURY SWIMMING POOL, SLEEPS 5 PEOPLE ENTER DOWN A PRIVATE DRIVE WITH AMPLE PARKING, THE VILLA IS SITUATED WITHIN ON OLIVE …

Alexandros Rooms and Studios Not rated yet
ALEXANDROS STUDIOS Are situated inside the town limits of Skopelos, on the central road leading to Stafylos. Set in 4.5 acres of grounds dotted with …

Limnonari Beach Rooms to Rent Not rated yet
10 rooms with en-suite bath, 50m from beach, key 8 km from Skopelos town and port 1 km off the bus …

Villa Anna in Skopelos Town  Not rated yet
This lovely town house is located on a steep stepped street high up in the village. Built on three storeys, it provides spacious accommodation with a high …

Villa Afrodite in Skopelos Island Not rated yet
The villa has two bedrooms. The first one has o double bed and the other one which is on the 1st floor has two single beds. The two floors are connected …