Though the name means "in the shadow of Athos" there is not a hint of anything dark or gloomy about Skiathos. Its smallish perimeter is rimmed with an astonishing 60 beaches, many of them literally golden, and its unpretentious town is a happy blend of cafes, tavernas, bars and boutiques in careless juxtaposition to private houses festooned with bougainvillaea, jasmine and myriad other colorful, sweet-smelling blooms.

There is only one town on the island, where most of the 4.000 inhabitants live. Also called Skiathos, it is built on the eastern coast on two low-lying hills lining the port and occupies the site of the ancient settlement. Life in the town is focused on the waterfront and the main drag, Papadiamanti Street, named after the island's most famous son, the 19th century novelist Alexandros Papadiamanti, whose house lies to the right on the first block going up the street. 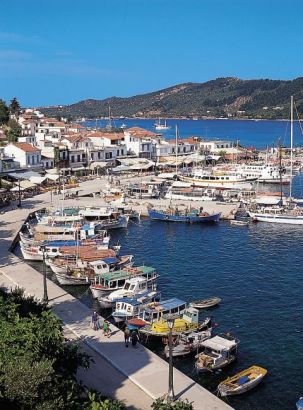 Wondering through the back streets between Papadiamanti and the waterfront can be a great source of amusement as there are so many pubs, nightclubs, shops and surprises to stumble upon.

Activities on the waterfront, on the other hand, is endlessly fascinating. Fancy, floating gin palaces may be docked alongside dumpy excursion boats and spunky fishing caiques. The waterfront is bisected by a small promontory known as the Bourtzi, a fortified islet now indistinguishable from the mainland. Segments of Venetian wall surround an attractive Neoclassical school building and a cafe. The best way of getting around the island and visiting some of those 60 beaches is to board one of the excursion boats lined up on the quay. The view of the sheer cliffs and the breathtaking colours of the sea is unforgettable.

Because of its popularity Skiathos is well served by both planes and boats. Olympic Airways schedules several flights per day from Athens at the high season. There are also numerous charters from major cities of Europe.