Sifnos Island is a kore-one of those elegantly draped young female figures of Archaic islanders liked to carve. Her beauty is graceful and modest. Unlike her parched neighbour Seriphos, just 12 miles northwest, Sifnos is well watered and fertile, a garden island. But to passing boats she appears formidable, for her sweetness is guarded by steep cliffs, broken suddenly by only a few deep-cut bays with safe anchorage.

The main towns pf Sifnos, Apollonia and Artemona, lie in the center, and the popular beaches are in the south; the rugged north, where the ancient silver mines were, is sparsely inhabited and reachable only by foot or caique. Because Sifnos is small (2,000 people) and relatively undeveloped (though ministers and ambassadors have houses here) her 30,000 tourists yearly overwhelm resources in August: The beaches are clogged and the buses packed. The most protected of Sifnos anchorages is the port of Kamares, a small white town on a bay on the west coast with high cliffs on either side, a good beach with dripping tamarisk trees, and a narrow green valley whose road takes you to the interior.

Little Kamares contains nearly as many shops, restaurants, hotels and bars, as the much larger capital, Apollonia. A couple of potter's studios still function, and there is a mining establishment at the north end, in one of whose shafts nymphs were once worshiped. But Kamares is a hectic tourist port, with new Athenian villas, and you'll want to move on. The old fishermen who still reside here whisper about nereids-and they don't mean the scantily clad tourists lunching at the beach-side fish tavernas. Apollonia, capital of Sifnos Island since 1836, seems a gentle,disheveled sprawl on the light undulation of the island's middle. Actually, there are six villages here. The bus stops at the lively main square, the busy central crossroads for all Sifnos.

The big building with a terrace houses the Folklore Museum, full of traditional pottery, weaving, embroideries(another Sifnos specialty) and vestments. Next to the museum, a little street leads into the town's lively heart.

The best way to see the villages is on foot. From the main square next to the Laki's cafe, a street winds upward to traverse the prettiest sections. On the right side of the street, through an archway , gleams the church of the Heaven Bearing Virgin. The marble carvings around the door give the date 1767, but the church itself is older; the relief overhead depicts Saint George and the Dragon. The marble column by the courtyard well is from the seventh-century B.C. temple to Apollo, Apollonia's namesake.

Now the road crosses into Ano Petali, quiet and pristine, tucked between its larger neighbours. The islanders scrupulous dedication to whitewash makes the villages of Sifnos seem daintier than those of the other Cyclades. The flag stones here are carefully delineated with very thin white lines, reapplied weekly; this is much more time-consuming than the thicker lines preferred elsewhere.

The flagstone street then descends slightly to cross a stone bridge over the seasonal Marinou river. Artemona, named after Apollo's virginal sister, is the most beautiful village in Sifnos. The walls of the church of the Virgin of the Troughs, on the rock outcropping to your left, were frescoed in the primitive style by a local monk 150 years ago. Marble tombstones are set into the floor.

Next you come to a small square named Nicholas Chrysogelos, a local teacher who led a contingent in the 1821 revolution and who later became Greece's first minister of education. His marble bust reigns over the tiny town hall and substantial houses. Soon the same street reaches Artemonas' capacious main square, where the bus turns to go back down to Apollonia.

The stone-paved street continues to wind through Artemano. The large Neoclassical houses of both sides of the street, with gardens of trees, vines and flowers in front of them, belong to families of shipowners who became wealthy a hundred years ago. The quite coexistence of elegant edifices and small houses, many with the characteristic Siphnian chimney caps of multi spouted inverted pots, all united by fresh whitewash, gives Artemona its graceful appearance.

The street now comes to Artemonas' multi domed chief church, the Kochi. In its courtyard, where Artemis's temple once stood, the Siphnian Cultural Society presents readings and concerts in summer.

From Artemona, a good dirt road traverses rather desolate countryside the 14th km to the pottery hamlet of Cheronisos on Sifnos Windy northern tip. Halfway between the two towns you can take a turnoff to walk to the ancient silver mines at Ag.Sostis. In the Archaic era, Sifnos grew rich from these mines. But it was not until the 6th century B.C. that the mines made Sifnos important. All citizens shared in the wealth, and the main square was paved with expensive Parian marble.

That was before the Sifnians substituted a gilt ball for one of gold as their annual contribution to Delian Apollo, and trouble set in. The sea flooded the mines as a punishment for this sin. Than the Samians embezzled money and used it to buy Hydra. Not long after the mines ran out of metal, and Sifnos has never again been especially prosperous. When the Turks tried to reopen the mines 2,000 years later, the Sifians, fearing enslavement as miners, hired some Frankish corsairs to sink the sultan's ship. 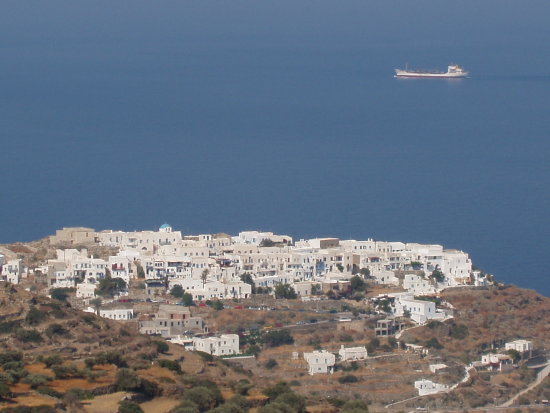 From Apollonia three paved roads lead to the three coastal villages. The road south to Platy Yialos passes through the villages of Katavati and Eksambela. Exambela is especially pretty and white, with flowers by every stoop.

On the hill of St. Andrew to the southwest lies an ancient acropolis, but not much is left. Objects from 3000 to 400B.C.keep turning up, but little of Sifnos's ancient splendor has survived to our times. A bit farther along, whitewashed steps climb to the Vrisi Monastery, cared for by the Lambrinos family. A deep, valued gateway opens into the courtyard and church, whose arcaded porch employs Classic Doric columns from an earlier temple. A couple of rooms are occupied by a museum of religious art. The Vrisi's flowing water is considered the best of Sifnos.

The southernmost of the coastal towns reached from Apollonia is Platy Yialos (Broad Beach), 10km away, the most popular beach of Sifnos. The comfortable, island-style Hotel Platis Yialos, with its sea view restaurant, is at the far end of the beach. There are many less expensive places to stay and eat, however. Platy Yialos is one of the several beaches where potters used to make the island's chief export, cooking pots. Sifnos was famous for pottery 2,000 years ago, and the potters of the island used to wander all over Greece plying their trade.

Some of the houses here are actually large, converted kilns. One workshop on the beach still operates regularly, producing traditional wear for export and sale on the primitive premises. The master potter is young Fragiskos Lemonis,whose family has worked at the wheel for generations.

Between the beaches of Platy Yialos and Faros, a touristic fishing hamlet, lie Chrysopigi (Golden Wellspring) Monastery and the long sandy beach of Apokofto, where there is a taverna. The Sifnians think of the monastery, built in 1650, as paradise, and the simple rooms it rents are booked well in advance.

The church sits on a rocky headland, with water lapping all about it. The chief icon here, which fishermen discovered gleaming in the waves, saved Sifnos in 1675 from plague and in 1928 from locusts.

The gap in the entrance, through which the sea whistles and hisses, was cut by another miracle. One dawn some local maidens who came to tend the church, found seven pirates asleep. When the brigands awakened and pursued them with impure intentions, the maidens prayed to the Virgin. Aristomenes Provelengios, who often wrote in a cell here, described what took place: "Suddenly a great quake shook the cape and cut it from the shore...the women fell to their knees and glorified the Virgin for her grace."

Kastro, 3,5km east of Apollonia,is an acropolis overlooking a little bay. Herodotus knew it when it was already a thousand years old. Built on the site of ancient Sifnos, Kastro was the capital city before 1833, with a population of 2,000. Today, though picturesque, it feels forlorn, and only 30 families remain all year. Most of the building are from the 14th century, many in ruins.

In the middle of the town, in a Venetian building, the Archaeological Museum displays a collection of smaller objects from the pre-Christian times. The Classical sarcophagi now in the main street were recently brought up from the flowing river below, where they had been used to water cows; the graceful Archaic torso of a kore that once reposed there has vanished.

In summer six ferries a week from Piraeus call at Sifnos,in winter, two. The trip takes 4 to 7 hours, depending on season, size of boat, and stops. These ferries also regularly call at Kythnos, Seriphos, Milos, and Kimolos. There are also frequent connections with Santorini, Paros, Syros, Ios, and Folegandros. Once a week the ferry to Agios Nikolaos in Crete, also calls at Kasos, Karpathos, Symi, Rhodes, and Chalki.

Buses serve all the villages that have roads, in summer they are impossibly packed. Schedules are posted at the Kamares stop and at the main crossroads in Apollonia. Taxis are available in both towns. Cars and motorbikes are for rent, though as the season progresses, constant use wears them down.