Santorini Island (Thira) is actually a cluster of islands on the windy southern periphery of Cyclades, 128 nautical miles southeast of Piraeus and 70 miles north of Crete, invites simile and metaphor.

To stand atop of cliff of Santorini's caldera at dusk and gaze out over the still-active volcano in the bay at the sun settling into the sea behind Thirasia is to experience a 17th century cartographer's vision of land's end: A bottomless abyss yawns and unnamed creatures lie in wait.

Not for nothing have some scholars named Santorini the site of the lost civilization of Atlantis; not for nothing is it called Greece's black pearl. If it is not the most beautiful of the Greek islands-and it may well be- Santorini is certainly the most inspiring. To experience Santorini Island's impact fully you must arrive by ship, preferably on a warm night very late in summer.

As you approach the island from the north, Santorini seems at first to be just another vine-and-chapel-dotted Cycladic isle. Then, as you round the cape between Thirasia and Thira, your head flies back in astonishment. Even the most jaded travelers sit back on their proverbial heels. 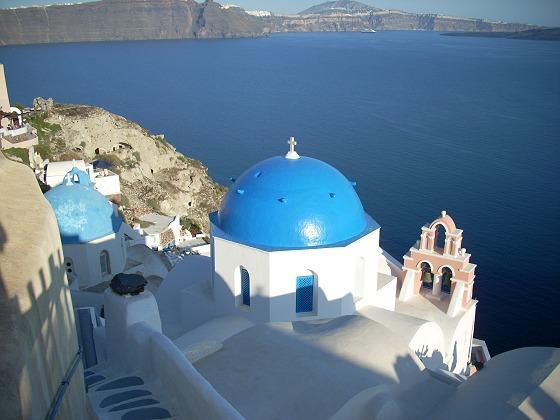 The western cost of Santorini consist of precipitous cliffs that loom above the giant gawking tourist on the steamer's deck, curving around the giant bay like a jagged crescent moon. You and the deceptively innocent-looking star-shaped crater are the only inhabitants of the great sea-filled caldera, formed when the volcano blew its top in the second millenium B.C.

Today Santorini is a geologically unstable cluster of five islands. Thira, Thirasia, Palea Kameni, Nea Kameni and tiny Aspronisi. And since it is still 80 degrees Celsius out there in the center-and you can take a peek into the cone if you dare-you get the distinct feeling it's not all over yet.Fourteen lovely villages, each with a distinctively different flavor, dot the crescent-shaped island, with Oia on the northern periphery of the caldera and Akrotiri 30 km to the south. Fira, the largest village and the capital, is located midway on the cliff face across from the crater.

Dangerous as this island has always been, set at the uncertain juncture of two vast tectonic plates, it has been attracting visitors-colonists, crusaders, pirates, and tourists-for some 5,000 years. Thira was inhabited as early as the third millenium B.C.; the oldest pottery finds on the island belong to the second phase of Early Cycladic civilization(c.3200 to 2000B.C.)

The internationally famous excavations at Akrotiri on Thira's south coast have revealed evidence of a high level of sophisticated civilization during the island's next major period, the Middle Cycladic(2000 to 1500 BC.)

The flourishing life of Akrotiri ended dramatically with the great eruption. According to Doumas, minor tremors preceded major quakes, forewarning Thira's inhabitants who quickly evacuated. Therefore no victims-or any gold have been found. The buildings at Akrotiri suffered considerable damage in the quakes, and there is some evidence that at least a few residents may have returned and were undertaking repairs when disaster struck again. Still, even they may have had time to board their vessels and flee to the neighboring islands.

The final cataclysm began with a fine rain of pumice that covered the entire circular island-and Bronze Age life ended on Santorini. A following paroxysm brought forth coarse pumice, which reaches a thickness of a foot and a half in the area of the excavation. Elegant Akrotiri was now buried, like Pompeii and Herculaneum, but preserved for posterity.

In the final explosion, the whole cone of the volcano disappeared, blown sky-high. The volcano's shell, hollowed out after the ejection of cubic miles of matter, collapsed, the sea rushed in, and the present, peaceful-looking lagoon was born. There would be other eruptions, and many other earthquakes, but he giant was beheaded.

No one built Akrotiri, but Santorini was to foster yet another major civilization, on higher ground to the northeast.

Travelers today can reach the site of Ancient Thira by a tortuous cobbled road straight up the face of the 1,210-foot high promontory of Mesa Vouno, above black-sand Kamari beach. The ancient city itself occupies an acropolis on the spine of the mountain and has the appearance of a compact narrow ship in a sea of air, sheer drops on all sides. Clearly, these people, like the great Garbo, wished to be alone.

Archaic tombs show that ancient Thira existed before the ninth century B.C. However, most of the monuments belong to the era of the Ptolemies (300 to 145 B.C.) the Egyptians maintained a garrison here to keep an eye on the Aegean. The Agora, Roman baths, and theater are still recognizable, and the Terrace of the Festivals, dating from the sixth century B.C., has some interesting features.

Once you are up in town, it takes a little time to decipher Fira's maze of cobbled streets - there are only a handful, however- but because cars are prohibited here you must get your bearings on foot. Fira is the best visited in the spring or fall, when weather conditions are less reliable but tourist hordes are less in evidence. This is a noisy place in high season, June through August, when you may decide to find lodging in Firostefani, Oia, Imerovigli, or Kamari, and simply drive to Fira to shop or enjoy the nightlife.

Shopping in Fira is rewarding, but selectively is crucial. Gold stores have proliferated in the last decade, and Fira at night seems to have been touched by King Midas with all ten digits.

Santorini is the most beautiful island in the world, according to US Magazine

According to American Magazine ”Travel+Leisure”, readers voted for Santorini island in Greece as the most beautiful island in the world.

It is the 16th year that the magazine organizes this competition. Santorini possessed the 6th place in last year’s votes but it is surely the winner of 2011, leaving behind the islands of Bali and Galapagos. 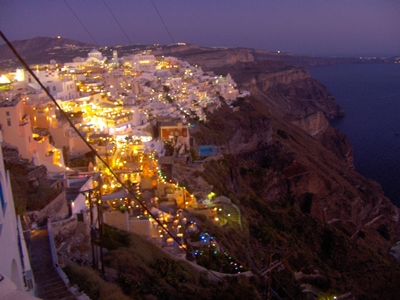 GETTING AROUND SANTORINI ISLAND

It is easy to get to outlying villages and beaches by car; you may stay in Firostefani, swim at Perivolos, catch the sunset in oia, dine in Fira, and dance at Kamari all in the same day.

Firostefani, one km north of Fira, is a quiet retreat from the capital. Easter is especially lovely here at the church of Agios Gerasimos. The Aktaion, near the church, is an authentic island's kafeneio, patronized by retired seamen.

The drive north is dramatic; precipitous cliffs to the east, with the isle of Anafi visible on a clear day. Oia at road's end, is a burgeoning resort with several fine hotels. The Atlantis Villas and Oia's Sunset are both apartment complexes with pools. The Atlantis' rooms are actually cut out of the cliff face. Oia's sunset is a cleverly honeycombed Cycladic maze of flatlets with kitchenettes.

Above Pyrgos the paved road climbs to the 18th century monastery of Profitis Ilias, open to visitors on rare occasions such as its feast day, July 20, when islanders and visitors alike are specially invited for soup and folk dancing. From Pyrgos turn left for the beach at Kamari or right for Akrotiri and Perissa beach.

Kamari, 8 km southeast of Fira, is a booming seaside resort, its black sand packed with bodies in high season, its pistachio and tamarisk trees dusted with fine sand.

En route to Perissa it is worth detouring, preferably on foot, through Megalochori, a picturesque village little-touched by tourism, and Emborio, where a goulas(Medieval Fortress) survives largely intact.

Near the airport on the east coast, the beach resort of Monolithos is less crowded-and windier-than Kamari.

Both reaching Santorini Island and getting off the island can be daunting especially in high season. The airport near Monolithos receives charter flights from Austria, Belgium, Finland, Sweden and the UK (Manchester) in season, and there are at least two Olympic Airways connections per day from Athens year round. In summer, flights from Mykonos, Rhodes and Crete are scheduled. However, reservations must be made well in advance, and flights may be delayed or canceled in strong spring and summer winds, which sometimes alter even the steamer schedule, though boat connections are more reliable.

The bus schedule in season is frenetic, and getting around by motorcycle is unspeakably hazardous. Car rental is reasonable and maybe arranged through most hotel receptionist-rental companies will pick up visitors and take them to their cars-but gas stations are few and far between and sometimes on strike.

Watch this 4 minutes long video of Santorini Island and watch the sun set, one of the most beautiful in the world.

Santorini Island, the southernmost of the Greek Cyclades, has to be one of the world’s most dramatically beautiful islands. Its unique topography is the result of a massive volcanic eruption some 3,600 years ago, which blew the middle out of the island to create a caldera, a volcanic crater filled with deep blue water from the Mediterranean Sea.

The most memorable way to approach the island is from the sea. As you sail into the caldera, red-and-black sheer cliffs rise directly from the water, their tops dusted by what at first looks like a sprinkling of snow. Then, as you get closer, the snow takes the shape of Cycladic buildings hanging precariously off the hillsides.

Zigzagging lines across the rock face become recognizable as roads that lead up from the sea to whitewashed houses perching on the cliffs. These are the twin settlements of Fira and Oia, known for their quaint cobbled alleys, white cubic buildings, chic boutique hotels with infinity pools, gourmet restaurants and unforgettable sunsets.

All of which add up to make Santorini Island an incredibly romantic holiday retreat for couples of all ages, as well as a wonderfully glamorous wedding and honeymoon destination. It’s not surprising that Santorini’s spectacular setting has made it one of the most-visited islands in Greece-in peak season it receives some 60,000 visitors each day and up to five cruise ships a morning.

It is also much loved by celebrities-visitors have included Beyonce, and Brad Pitt and Angelina Jolie. 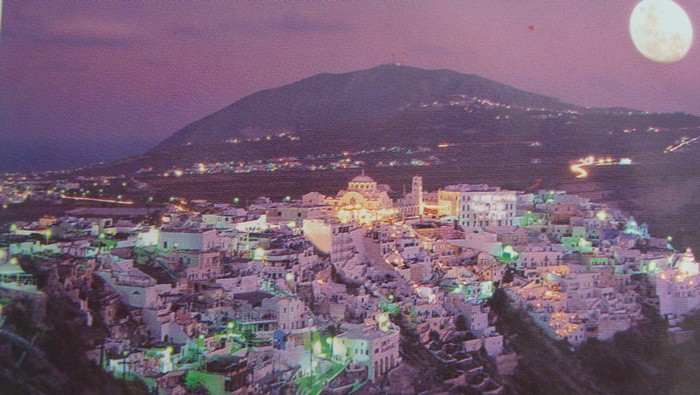