The scalloped coastline alternates tiny beaches with dramatic rocks. In the slight haze the high ridge of mountains that forms the island's spine seems painted in pale watercolors. 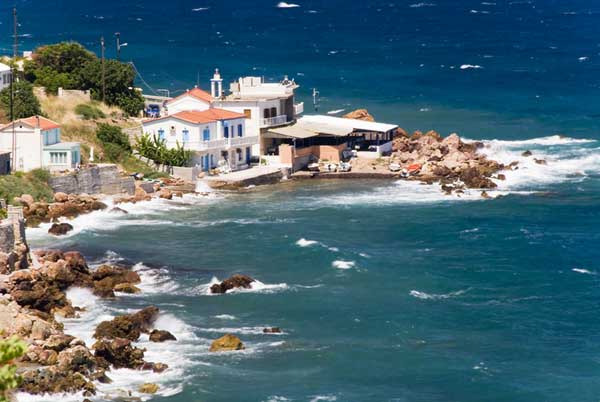 Plentiful mountain springs make the 184 square miles of Samos one of the greenest places in Greece. The rocky shores are broken by pebble and sand beaches that range greatly size. It is a gracious landscape, topped by Mount Kerkis and fruitful with trees and vines. In the summer of 1990, Samos suffered a series of forest fires that burned about 7,000 acres of the pine forests, hillsides, pastures, and farms in the eastern part of the island.

Samos wine, usually red and rather sweet, has been famous from ancient times. The wine got a great boost from the Crusaders, who took it back to Rome where it became very popular as communion wine. Kavas, wine shops display dozens of kinds of locally made wine and ouzo.

A great portion of the island is covered with vineyards, from which wine is made, including that from the Vathy grapes.

The most important places are that of Pythagorio, in the southeast, Karlovasi in the northwest, and Marathokampos in the southwest.

The island's population is 33,814, which is the 9th most populous of the Greek islands.

Early Anatolian settlers were followed by Ionians from Epidaurus , Lesvos, and elsewhere. By the seventh century B.C. Samos was a leading commercial center, utilizing ships bought from Corinth.

Samos was one of the first island to accept tourism after the war, and the results are mixed. In some areas there is little left of the original character of the island. 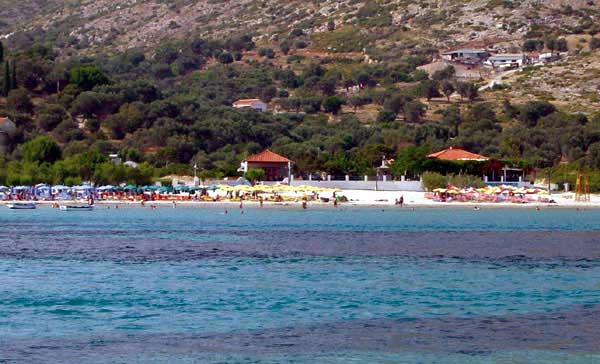 The port and capital of Samos, Vathy is a sizable town with population 5,500, sprawling over the harbor on the northeastern coast of the island and up to the surrounding hills. Once, in the heydays of the tobacco trade, the port at the deep bay was called Lower Vathy.

The village on the hill, safe from marauders, was Upper Vathy. Over the years the two parts have merged, although on road signs only the upper is still called Vathy. The whole town has been called Vathy or Samos interchangeably for the last ten years.

The city hall, the large church of Agios Spyridon, the post office, and the Archaeological Museum are clustered around the small municipal garden, two streets back at the center of the port. The morning farmer's market(laiki) is held just outside the cathedral.

Pythagorio (Ancient Samos, on the coast south of Vathy and just west of Psili Ammos, is the most popular of resorts and also the island's main archaeological area. Tobacco was once a main export of Samos, then it was olives. Now there are more tourists than trees. If you haven't booked in advance, summer accommodation becomes a matter of taking whatever you can get.


Megali Panayia, just south of the small viallage of Mytilinii, was built in 1593.

One story tells of two monks who came from Turkey to Samos, upon hearing of its revival; one monk was overcome by the vision of a miraculous icon buried a dozen yards down, where holy water now springs from the ground. The icon was burned in a great fire in the 18th century, but the church's frescoes are outstanding.

Kokkari, 10km and 20-minutes bus ride west of Vathy, blends into Kokkari beach, both built on the seaside. There are rooms to rent everywhere, and its shore is lined with bars and eating palces. This old fishing village has expanded rapidly to accommodate tourists. Some houses, with their tiny, enclosed balconies, remain from the Ottoman era.

Inland from Kokkari is the oldest of the new monasteries: the monastery of Vrondiani, with fine 17th and 19th century icons and wood carvings. South of it is a ruined Medieval monastery.

Karlovasi, 33 km west of Samos, is actually five separate towns. To the left from Samos road is Neo Karlovasi, a modern, bustling market town with shops, schools, the University of the Aegean, libraries, a modern medical center, and the bus terminal. It is well supplied with new hotels.

One and a half kilometers from the port is Potami , a splendid, large pebble and sand beach with shade trees and tavernas along the curve of the beach. Umbrellas, sunbeds, and rooms may be rented. A caique runs from Potami to the beaches of Megalo Seitani and Mikro Seitani.

Wade or swim up to the river from Potami through waterfalls or walk along the coast to reach these and other fine and unfrequented beaches.

An interesting drive west and then north from Votsalakia(pebbles) over poor roads(use cautions) to Mount Kerkis twists past grey rocks, dark trees, and silver olive trees against a brilliant sky, punctuated by the dotted lines of fences and terraces among the groves. This is the wild side of Samos, amid the harshness of bare scree and mountain scrub.

Here is the welcome sight of a series of windmills, meant to generate local electricity. Soon it is too high for trees. Looking down from the heights you see fire-burned hills, forests, and the sea dotted with neighboring islands - Fourni, Ikaria, Samiopoula, and many more. Pythagora was imprisoned by Polykrates in one of its many caves.

The airport of Samos is on the road to Chora, just west of Pythagorio. There are flights from Athens twice daily in summer and from Lesvos, Chios, Mykonos, and Kos at least weekly. There is also a weekly air link with Thessaloniki. Ferryboats run from Piraeus once or twice per day in summer and six times per week in winter. The trip takes 12 hours. There is also a ferry once a week from Kavala Local boats connect Samos with Chios and Ikaria.