Patmos Island, once known vaguely as the spot where St.John wrote the Revelation and conjuring up visions of crags, caves, and austere dark-stoned monasteries, Patmos, the northernmost of the larger islands of this group, has recently been gaining a reputation as the Mykonos of the Dodecanese.

Throughout its history the island has maintained a delicate balance between the sacred and the profane, with both profiting from the other's presence and doing so with a judicious amount of respect.

It is a combination, too, that works greatly in the favor of visitors in search of both riotous fun and restful quite, a twosome rarely found together elsewhere. Patmos is seven miles long and three miles across at its widest, is both convenient and deceptive. In outline it resembles a seahorse floating upon its side, head to the north, nose pointing towards Turkey, and its navel the eastward-facing port of Skala, nerve center of the island.

From here connections are easily made via the north-south spine of Patmos' only road or by sea with the outlying farming and fishing communities and major beaches, all in coves and bays on the eastern side. These are reachable by car in five to ten minutes or by caique in twice that time.

With a car or even a fast motor launch, it is possible to see most of Patmos in a day. On the other hand, exploring its many coves, bays, and tiny, secluded beaches can absorb an entire or even several summers. For visitors from cruise ships with only a few hours to spend on the island, visits to the monasteries of the Apocalypse and St. John are essential, if only to see from outside the latter the extraordinary view of the island and the vast expanse of the Aegean spread out below.

Also recommended is a stroll through the whitewashed, maze-like streets of Chora with its 16th and 17th century mansions, the former homes of wealthy ship-owning merchants now beautifully restored by the wealthy and not-so-wealthy artists, actors, businesspeople who came to cherish their crumbling elegance in the 1960 and 1970.

Those with days and weeks to spare will have the opportunity to savor the more hedonistic side of Patmian life: the nightlife of Skala and Chora; the wonderful variety of the island's beaches, from the multicolored pebbles of Lambi to the fine, pure sand of Psili Ammo; the surprisingly high quality food, from the lunchtime fare on the beach at Kambos to the quite decorum of dinner in a restored mansion at the hilltop town of Chora; and, finally, excursions to the nearby island of Arki and Lipsi and to the Turkish port of Kusadasi and its magnificent nearby ruins of Ephesus, from which St. John embarked on his exile to Patmos.

Finding accommodations from which to begin these explorations can often be an adventure in itself, particularly at the height of the season, in July and August.

Patmos' sudden emergence in the 1970s as a resort as well as a religious center took most of the islanders by surprise, and only recently has there been a boom in hotel construction. Before that a search for a bed for a night often ended on a beach or a makeshift cot in the living room of one of the Patmian women who await arriving ships with offers of a 'room'; as this scenario occasionally has been played out even in recent years, it is imperative to book accommodations in advance.

There are also various rooms and houses to be rented near the beaches of Melo-i, Agrio Livadi, and Kambos, some of them little more than a bed and chair, other luxury villas.

Although in Chora there are a few rooms to rent, and luxury villas as well, these are very hard to come by and even to inquire about.

Sunset in Chora can be spectacular, as the great orange globe sinks out of sight at the edge of the Aegean somewhere beyond Mykonos. Nightlife in Chora is also something special, in spite of the presence of the monastery, although the sidewalks do tend to roll up at about 11.00P.M., no matter how much the shank of the evening may still be bouncing upon them.

For a touch of something gentler after a strenuous day at the beach, there are some truly fine cuisine and lovingly cared-for atmosphere of some great restaurants situated in beautifully restored Chora mansions. 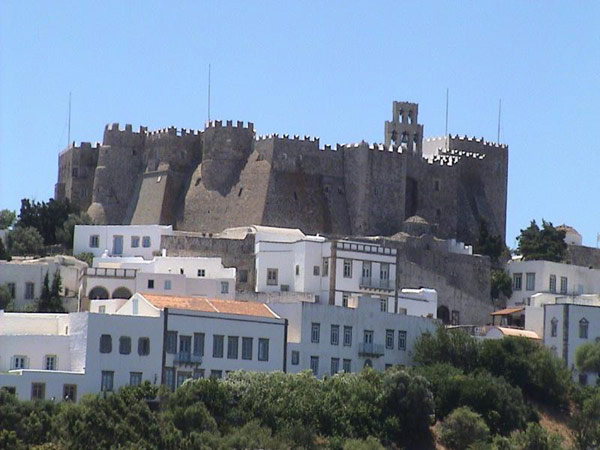 Below, in the harbor town of Skala, life assumes a much livelier and more contemporary configuration. During the day Skala is a town of services, crisscrossed by the traffic of people going to and from the market, banks, post office, travel agenicies, and as the day approaches noon, the bus and caique stations that will take them either home or to the island's various beaches. By 2:00P.M. Skala looks as deserted as an outpost in the Sahara, with taxis just about as hard to come by as they would be there.

Nightlife in Skala and some of the outlying beaches and towns, principally Kambos, Melo-i, and Grikou, revolves around a selection of tavernas, bars, discos, and rarely live Greek music and dancing.

From Piraeus, one ship a day leaves around noon for Patmos and the rest of Dodecanese. Conversely, there is a ship leaving from Rhodes for Piraeus at about the same time. As Patmos is equidistant between the two ports, these ships often arrive at the island within minutes of each other, occasionally causing some confusion. Depending upon the weather and the speed of the ship, the trip from Patmos to either Rhodes or Piraeus can take anywhere from 9 to 12 hours.

It is possible too reach Patmos from Athens in a much shorter period of time(3 to 4 hours) by flying to either Kos or Samos and taking a fast motor launch or hydrofoil to the island.

There are at least two flights daily from Athens to both Samos and Kos.