Paros Island was the favorite island of Nobel Prize winning poet George Seferis, and Archilochus, the creator of iambic verse, wrote the first signed love poem here in the seventh century B.C. Paros has been praised for poetic reasons: charming villages, cafes by the sea , blond beaches, harmonious landscapes, a sense of history. But resources are not over-strained (except mid-August) and the popular ideal of what a "Greek island"should be is authentically realized here. Consequently, Paros's popularity has risen dramatically in the last decade.

Writers have frequently praised Parian marble, perhaps the world's best. The stone, in Classical times the most expensive, is more translucent than that of Carrara. The Venus de Milo, the Hermes of Praxiteles, the tomb of Napoleon, and many fragments built into houses and walls here possess and unequaled sheen. The deep tunnels of Marathi's ancient quarries, once worked by thousands of slaves, are strewn with chunks of it, allowing you to see why ancient builders preferred it for roof tiles-to let the light glow through.

Because of its marble Paros assumed cultural importance in the Cycladic Age (3000 to 2000B.C.) Beautiful statuettes and vases were exported around the Aegean in boats no bigger than the many caiques that bring in fish every morning.

Later Paros became a center of Ionian civilization. The Parian sculptor Skopas worked with the famed marble in the fourth century B.C. and the late Isamu Noguchi visited the quarries to get some stone in more recent times. Paros today is small enough to feel insular-sea vistas are the rule-yet large enough to absorb younger travelers here for the vigorous (overly vigorous in August) nightlife, families looking for an affordable beach holiday, and the many Europeans who have built luxurious villas. Paros also has a variety of accommodations ranging from upper middle class(but not luxury) to camping. Though only a few restaurants remain open all year, from May to October there are dozens to choose among.

Paros Island has three main towns- the port and capital Parikia, on the west coast, the fishing village of Naoussa to the north, and the farming mountain town of Lefkes-as well as a sprinkling of little villages.

Parikia along with Mykonos, may be the Cyclades' prettiest port town; Seferis said it was visual music.

From the dock caiques take bathers to the beaches of Krios and Kaminia across the bay, because they are pretty, sandy and protected from the prevailing north wind, they are very popular. On the hill above them are the ruins of Archaic Delion; not much is left of Apollo's temple, but the splendid view toward Delos is a reminder of the god's power.

Parikia's two main streets, the waterfront and the market converge at the windmill by the dock, now a tourist information center. Starting here and walking into the market, you traverse a large square with new shops, cafes, travel offices, taxi stands, and the somewhat -parched town gardens.

As you continue the town becomes quite charming. Turn left at the first crossroad and you pass more shops, the house where Greek revolutionary heroine Manto Mavrogenous ended her life forgotten and neglected , and some stately town houses with marble balconies and gardens where the descendants of the old aristocracy still live. Finally, you reach the Church of a Hundred Doors, Greece's oldest church in continual use.

The church is officially called the Dormition of the Virgin, the Parians call it Panayia(All Holy Virgin)history books call it Katapoliani(below the town), and guidebooks call it the church of hundred doors, a misleading name. No one knows its exact age; it was built in the sixth century , probably during the reign of Justinian, perhaps by a Parian disciple of the architect of Istanbul's Ag. Sophia. It is certainly beautiful .

Entering the church you are immediately struck by a sense of the mysterious and by the clear proportions of the sanctuary. The columns are per-christian, but the marble capitals are elegant Byzantine work, as are the marble screen and iconostasis.

At the back of the church a door leads into what is really the separate church of Ag. Nikolaos, older than the main church.

After leaving the church, return to the first crossroads, start down the market street, and you will see to the left, over the archway, two folks statues that the Parians claim once marked the entrance to a house of ill repute. A bit farther on the right, stairs climb to the 13th century Kastro on the ancient acropolis that rises between the market and the waterfront. 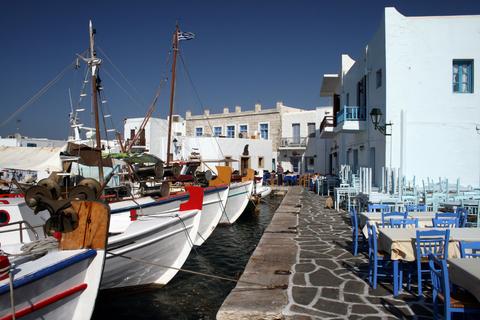 The Archaeological Museum, between the church and the new high school, contains half of the famous Parian Chronicle, a chronological account of the main events of Greek history, from 1582 to 264B.C., carved on a translucent slab of Parian marble. Object added most recently to the collection are from the excavation near Nassau. The large mosaic showing Herakles haunting was found in the Church of a Hundred Doors.

The Valley of Butterflies, 6,5km from Parikia on Paros' western slopes, is in a beautiful area of lush vegetation, not far from the convent of Christ of the Woods. It makes a lovely walk, taking about one and a half hours one way.

The first paved road on Paros leads to Naoussa, 10 km northeast of Parikia. On the way it passes a little ruin called Three Churches- remains of three 17th century churches made from one seventh-century church, which in turn was constructed of marbles from the fourth-century B.C. heroon of Archilochus.

Just 20 years ago Naousa was a sleepy fishing village,today it attracts sophisticates from all over Europe. Boutiques and bars are everywhere. The center of all this nightlife is the enclosed little fisherman's harbour and wharf, whose brightly coloured boats jostle gunwale to gunwale. Fishing activities proceed as always; the fishermen disdain the tourists as a point of honor.

From the harbour, the caiques take bathers to four beaches around Naoussa's capacious harbour. Kolymbithres the most developed, has much photographed, wind-eroded rocks, Monastery is for the nudists; Lageri and Santa Maria are less crowded, long and sandy, and frequented by windsurfers.

Lefkes and the Lower Villages

The mountain road to Lefkes, 10 km east of Parikia passes the turnoff to the ancient marble quarries at Marathi where three ancient tunnels still bore deep into the marble mountain, skirts the pretty village of Kostos, and traverses Paros' richest olive groves.

From Lefkes you can a good road that climbs mount Profitis Ilias, 2,500 feet high and caped by a radio tower and two churches, for a panoramic if windy view of Paros and the islands. The road down from Lefkes leads to the Lower Villages, as the does the stone-paved way on the valley's right side, the Byzantine highway that once crossed the island. Walking this takes about an hour and concludes at the wallet village of Prodromos. Parians favour Ioannis Roussos restaurant just outside Prodromo's wall for Sunday lunch; chickpeas are the specialty.

Of the other Lower Villages, Marpissa and Marmara and quite and pretty, but Piso Livadi, a fishing village with a beach, gets lively in summer. A mile past it is popular Logaras beach, and past that is Golden beach, the most extensive stretch of sand on Paros. A drive around Paros will take you past many unfrequented beaches.

Antiparos means "across from Paros" and the island's fortune have always depended upon her big sister. In fact underwater ruins show that a causeway once joined them.

There are two ways to get to Antiparos. One is by caique from Parikia, a beautiful 40-minute ride along Paro's gentle western coast. The islet in the strait to the west is Saliagos, important archaeologically because the earliest traces of Proto Cycladic village life-from before 4500 B.C.- have been excavated here, including house foundations, obsidian tools, and female figurines.

The port of Antiparos has one main street and two centres of activity: the quay area and the main square, a block in. To the right of the square are houses and the castle's 15th-century wall. At the other hand of the quay from the ferry dock a dirt road takes you , after ten minutes on foot, to an idyllic sandy beach; you can wade across to the islet opposite , Fira, where sheep and goats graze. A crowded campsite abuts the beach, popular with young nudists.

In the 19th century the most famous tourist sight in the Aegean was the Cave of Antiparos. In August it still attracts 500 visitors a day. 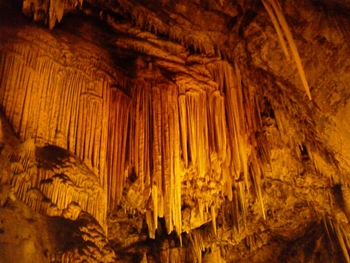 Paros is a hub for the Aegean sea travel; more boats(often 30 a day) stop at Paros every day than at any other islands. The trip takes from five to seven hours, depending on season, stops, weather, size of boat, and departure from Piraeus or Rafina(shorter). Paros island also has scheduled boat connections with 20 other islands and with Thessaloniki. Daily connections in summer are with Siros, Naxos, Ios, Tinos, Santorini, Mykonos, and Delos.

There are frequent connections with Samos, Siphnos, Crete, Amorgos, Ikaria, Rhodes, Anafi, and Sikinos; less frequent with Astypalea, Koufonissi, Folegandros, and Karpathos. The weekly boat to Thessaloniki also stops at Skyros and Skiathos. The popular weekly run from Ancona(Italy) to Kusadasi (Turkey) calls also at Kefallonia and Corfu. At Easter and on August 15 schedules go haywire and the boats are mobbed; advanced tickets are recommended.

Depending on the season, there are two to six daily flights between Paros and Athens. The flight takes 30 to 40 minutes; there are also two flights a week to Rhodes and two to Crete. Seats must be booked in advance. Low clouds and south winds cancel flights, big north winds cancel boats.

Buses go from Parikia to all main towns on Paros. The schedule is posted at the main stop to the north of the boat dock along the quay. Buses are jammed in summer. There are many cars and motorbikes for rent, most of which work. Taxis wait in the main squares of Parikia and Nausa.

Ouzeri Apostolis Not rated yet
Ouzeri Apostolis stands in a wonderful area beside the sea. The 40 years experience captured all the locals who live here and the holidaymakers as well. …