Lawrence Durell wrote that Milos Island is dull-but then he was never here. From the boat milos(Apple) resembles a crab whose claws protect the biggest and best bay in the Cyclades. During the WW1 the Anglo-French fleet claimed safe anchorage here, and in the WW2 the Germans occupied it.

Before entering the Bay of Milos, you first sail by Kimolos on the left; then on your right the islet Erimomilos(Desert Milos) rears 2,100 feet above the sea like a B-movie dinosaur-island.

Mining operations have scarred the mountains. Milos today mines perlite(Greece is third in world exports), bentonite, kaolin and other minerals. Because of the mines Milos is different from the other Cyclades, which supported farmers and fishermen who had enough to eat but lacked cash and so grabbed at tourism. The Melians were miners with salaries; tourism is only now being developed, and the Melians aren't all happy about it.

The port of Adamas was founded by Cretans fleeing the Ottoman Turks in 1853, though early Christian tombs have been uncovered here.

With its narrow quayside, restaurants, cafes, and fishermen, Adamas has become the liveliest town on Milos, where business is done and amusements pursued. It is the only town with facilities for visitors, except in summer. Adamas now has expanded about its little hill to Neohori(Newtown) along the beach to the east.

Milos is the best organized of the islands; The efficient tourist information office, opposite the boat dock, provides a list of all accommodations, noting vacancies. Though few tourists seem to be about, in summer every bed is filled. 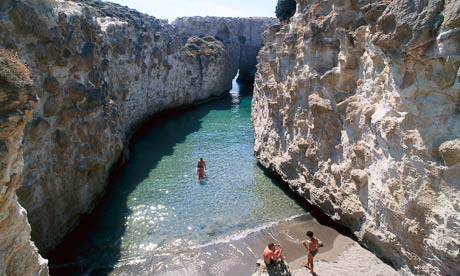 Milos is unsophisticated, and fresh fish is plentiful. Most tavernas are on the quay, with tables scattered among the strollers a few yards from the sea. The Phlisbos(Surf-sound) has a barrel of good local retsina on tap, and the Kynigos(Hunter)grills its fish on a charcoal brazier. The only full scale restaurant, a hundred yards east along the bay, belongs to Trapsetelli brothers. The Melians traditionally come to Adamas on Sunday nights to stroll along the quay and have a coffee at Yanko's seaside cafe, next to the bus stop. Adam is so small that the crowd along the quay on any summer night rubs shoulders.

The three vaults and one dome of Milo's oldest church, Agia Triada, are unique in Greece - except for one other church in Arcadia. Marble cravings decorate the bell tower, lintels, and door frames. Melians love pebble mosaics, which decorate the courtyard. Other examples are the eagle and Melian apple in front of the Dormition atop the town. The Dormition priest has collected a group of religious objects in a tiny museum, which he may show to the interested visitor.

When the weather is good, caiques take tourists from Adams around the much-indented coast, past twisted islets, huge sea caves, colour-streaked rocks, and bizarre landfalls.

Most of the island's 4,500 inhabitants reside in the eastern claw. Leaving Adamas you climb north to Triovasalos, from which dirt road wind down to the north coast beaches and fishing hamlets. After 4,5km you reach Plaka, the capital of Milos and its prettiest beaches, with old houses on lanes too narrow for cars.

The village was constructed about 1800. Louis Brest, the French consul and virtual ruler of Milos, built the Catholic Virgin of Rosary, in 1823, using stones from Zephyria's ruined church. The old marbles in the neighboring courtyard belong to the adjacent Virgin of Corfu church, with beautiful icons that date from the 16th century. Next door, an old mansion houses the Folklore Museum , which features authentic displays of well-to-do family life in days gone by.

At the bottom of the town, the Archaeological Museum looks rather more impressive than its collection warrants. It displays small objects(the big ones are in Athens) from all the periods of pre-Christian Milos.The prize piece is the Lady of Phylakopi, a terra-cotta statuette in Minoan style from about 1350B.C. that rather resembles a lamp stand.

From the Plaka bus stop, the street to the north, mostly stairs, climbs up to Kastro, a ruined Medieval town built on top of an ancient one, hugging a basalt cone. Once-fine homes, some now being restored, formed the outer fortification wall. The big church a little below the summit, with a superb bay view, is the Marnier Virgin, built in 1728. The marble door lintel displays the escutcheon of the Crispi family, who wrested Milos from the ruling Sanudi in 1363. At the top are old walls and new reservoirs.

A short distance south of Plaka is the mountain village of Trypiti. Not far from the church of Agios Nikolaos, whose bell tower houses a large clock, a little cafe serves coffee and fresh snacks on a small terrace overlooking the Vale of Klima and the bay. A road to the south leads to these places.

A road to the south leads to these places. From Kastro to Klima, ancient Melos sloped to its harbour. A road sign points out the path that leads to some of the Classical city's remains.

About 300 years after the fall of Phylakopi on the north coast, circa 1.200 B.C. the Melians built their city here, and it lasted until Byzantine times. These ancient Melians had tribal connections with Dorian Sparta, and not,like most of the Cyclades, with Ionian Athens, which may explain why Melos produced few poets, sculptors, or philosophers.

Klima lies on the ancient port, and in an olive grove to the north is a Roman mosaic. Klima itself is tiny - a colourful row of houses and garages for caiques, some cut into the cliff. Many such cliff caves are in use all over Milos.

Zephyria, in the flat centre of Milos just east of the airport, has a strange history. It was built after A.D.500, when ancient Melos and Kastro were abandoned. In 1383 the ruling Crispi made their capital here and the town flourished, partly as a trading center for pirates, with a population of 5,000. But in 1793 the people of Zephyria mysteriously sickened, possibly of noxious fumes from nearby marshes and sulfurous rocks. The survivors briefly re-established Kastro's foot. This is why so many of Zephyria's valuables are in other Melian churches, though many old marbles remain in situ.

From Zephyria a partially paved road crosses the low southern mountains to the island's most popular beach, Paleochori(old village), on the south coast. A long sandy stretch with rocks streaked yellow, red and green, its waters are warmed by hot springs beneficial to people who suffer from arthritis. Sometime vapor clouds boil up from the sea. Hot water spouts bubble up all over Milos, even in the quayside cliff of Adamas, where the cave is now barred over. 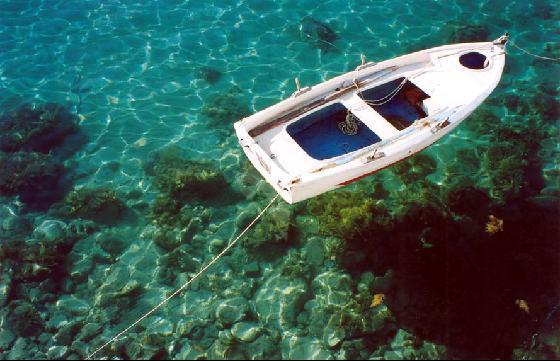 Twelve kilometers southwest of Adams is Agia Marina,once an important monastery. There is a popular festival here on July 26. Below, a dirt road winds to the beautiful lagoon and beaches of Rivari, where caiques from Adamas call in summer.

A long ride of 14 km west from Agia Marina, through rough country side, ends at the deserted church of Iron St. John, affiliated with the monastery of St. John on Patmos. The festival here on 25 September is the most popular in Milos. All Melians can tell you the legend of this place. When pirates attacked during a festival, the faithful prayed to the saint, who turned the wooden door to iron. A determined pirate climbed to the dome and tried to fire his pistol through a hole, but it exploded and fell to the floor below, along with his severed hand.

Ten kilometers to the northeast along the northern coast road from Adamas is Phylakopi, marked by a small sign. Phylakopi, on a hillock between the road and the sea, will please admirers of Minoan civilization, or anyone who enjoys imagining where ancient towns rose and thrived.

The coast just above Phylakopi's parking lot provides a good view of the huge sea cave of Papafragas, with strange rocks and caves on either side. Precipitous stone steps take the goat-footed down for a dark swim. A caique from nearby Pollonia will bring you here; it also circles the islets called Glaronisia(Gull Islands), noted for their extraordinary primatic lava formations. Most visitors like Pollonia, a pretty little village on a beach about half a mile east of Phylakopi, with a couple of tavernas and rooms to let.

Volcanic Kimolos, half a mile from Pollonia, looms over the village. Though only five miles across, Kimolos is big enough for the Milos steamer to call twice a week. Only 20 minutes by caique from Pollonia, it makes a pleasant half-day excursion into an older Greece. Passing the long shaded beach of Alyki, you see a quarry where inlanders cut blocks of tufa stone, which explains the four-square neatness of the local architecture. The uphill walk form the harbor, Psathi, to the main village of Kimolos, or Hora-no buses or taxis here- takes 20 minutes. There is also one interesting church near the main square: St. John Chrysostomos was built in the 14th century and is now being repaired. The alleys and arcade passageways of Psathi are noisy with chickens and donkeys, otherwise is a quiet place. The roofs of the houses are still made of a combination of bamboo, seaweed, and soil; plowing and winnowing are done in the same way they have been done for thousands of years, as no big machines have been imported to the island. Above the town are haunted ruins of the 14th century Kastro and a line of windmills, one of which still grinds.

The hot springs at the beach of Prassa are, unfortunately, radioactive, but there is a good reason to make the 15-minute walk tot he north from Psathi. Off the coast here lie the sunken remains of the ancient city that J.T. Bent saw and wrote about in his 1885 account of his travels. Though only 900 people live in Kimolos, in summer the figure triples, when islanders resident in Athens return home.

Two to seven ferries from Piraeus call weekly at Milos, depending on the season. The trip takes 5 to 8 hours, depending on weather, season and stops. These ferries sometimes also stop at Kythnos, Seriphos, Sifnos, and Kimolos.

Again, depending on the season, there are two to seven weekly flights from Athens; the trip takes 30 to 40 minutes and reservations are required. Fog and strong southerly winds cancel flights.

«SIROCCO» Restaurant in Milos Island Not rated yet
Our fish tavern serves fresh fish which is caught daily from the crystalline seas around Milos. The caiques set out every morning towards the open sea …