The upper hills are covered with purple thyme awaiting conversion to local honey by bees from the blue boxes lined up nearby. Strong winds sweep down upon Limnos from the Dardanelles, and what with the free-ranging goats and sheep it's a brave tree that makes it through adolescence.

Limnos claims the most advanced Neolithic civilization of the Aegean. The island was dedicated to the god Hephaestus, the smith who was, for his sins, married to the irrepressible, Aphrodite. He was lamed as a result of heavenly child abuse: He tried to break up a fight between his parents, Zeus and Hera, and Zeus threw him out of Heaven. He landed on Limnos. 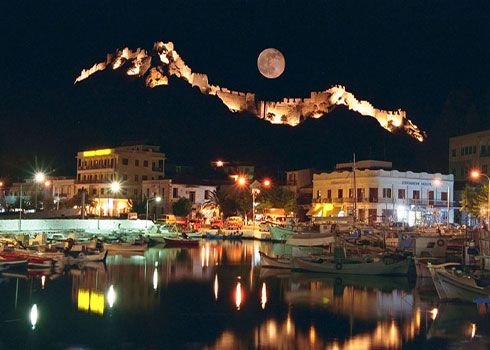 Specialities of the island include wood carving, embroidery, local sweets, loukoumia(Turkish delight, not at all the kind that you find abroad), cheese and dried figs. One of the best parts of the island vacation can be the joining in a panegyri, a local church festival and fair.

Feasting, song and dance, and a welcome to visitors characterize these events, which take place through the years on the saint's days.

In Limnos, Portiano goes all out on August 6, while the village of Tsimandria celebrates the Dormition of the Virgin, a major Orthodox holiday, on August 15. On September 7 the festival is at Ayios Sozos, and on the 17th Ayia Sophia is honored at the village of the same name.

The major interests of the island are clean waters, originally grown food and hospitality, archaeological sites at Myrina, Polychni, Kavirio and Hephastia. 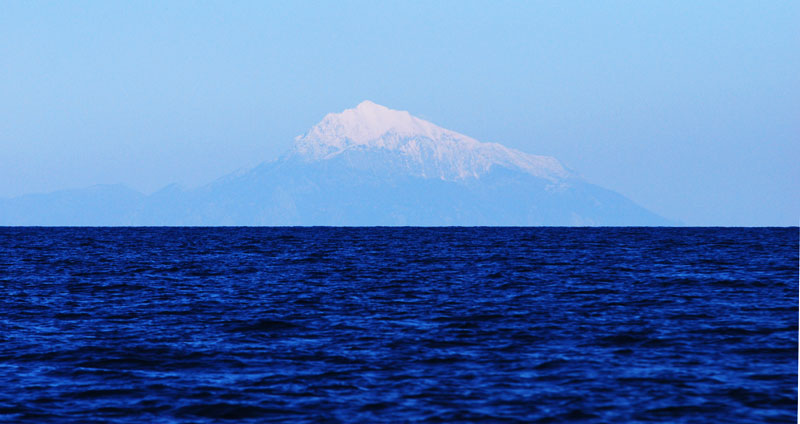 The capital and port of Limnos, Myrina, is also called Kastro for the ruined castle standing sentinel over the harbor. Some of the walls are prehistoric; most were rebuilt in 1186 by the Byzantines and later by Venetians and Turks.

It's worth the climb for the splendid view, and hidden passages, which invoke an atmosphere of age and mystery. On a clear day you can see Mount Athos, 36 miles to the northwest. But this is not Disneyland, and there are no safeguards, so it's best to go with a companion and non skid shoes, a flashlight, and possibly a stout stick for probing dark places.

Myrina is a town of respectable size on the west coast, with tavernas, garages, banks, and even a small hospital. On the main shopping street are a couple of foreign bookshops, one at the port, the other at the bus terminal.

The Archaeological Museum's collection, housed in an old mansion between the bishopric and the school, contains artifacts found at the Neolithic settlement of Poliochni, which predates the earliest known city at Troy, as well as items from later sites at Myrina, Kavirio and Hephaistia. Displays include a plate of 6,000 year old tiny, ossified figs.

At Platy, about 2 km south of Myrina, are a popular summer bouzouki and cafe restaurants. Good swimming can be found at Thanos and eastward at Evgatis.

Two kilometers north of town is popular Kaspakas beach, and on the way back to Myrina, latish in the evening, you will find the lively Avlonas disco.

The main road crosses the island from Myrina east to Moudros, passing through farmland with an occasional wriggle through a picturesque, narrow-lane hill town. All the villages are nicely labeled in Greek and English.

Moudros Bay, a fine natural harbor that divides the island was the base for the disastrous British Dardanelles campaign of 1915. There is a very tidy British cemetery of 900 graves. Moudros, on the eastern shore is the second most important city in Limnos, with a population of about 1,000. 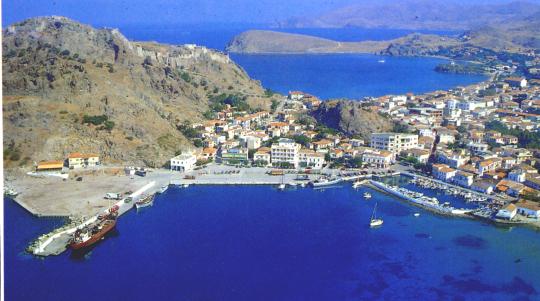 Skandali, the southernmost village of the peninsula, is tiny, with only 150 habitants. There are some big sandy beaches here, as well as the church of Ayios Sozos. Offshore at Charos Reef blocks of marble were found belonging to an Archaic Temple of Apollo, which stood in ancient Chryse, a town mentioned by Herodotus as having been drowned by an earthquake.

This suggests some interesting underwater exploring. Even if you don't find the lost city, Keros Bay is a good place for swimming.

As you head north by the eastern road you come upon one of the earliest cities of the Aegean, even older than Troy, which stood at Poliochni on the eastern coast near Voroskopos. Tour buses from Myrina visit the impressive site, which include some 16-foot town walls that are still standing.

The stone remains of houses are very clear, even showing traces of plumbing - the earliest Aegean stone baths. The hoard of the gold treasure found here is in the National Archaeological Museum in Athens.

The northeast peninsula is served by dirt roads, and those that lead from the main route to the sites, which are at the water's edge, are usually rough and frequently ill-marked. Take your time and be sure to take along water and picnic.

Kotsina,which was a busy center in Medieval times, is proud of local heroine Maroula who aided the Greek ships in defeating Suleyman Pasha in 1478. Kotsina has a small snack bar at the shore, though the water is not that inviting for some swimmers. Below the church is a holy spring, deep in the earth.

But the main attractions of this area are the archaeological sites of Hephaistia and Kavirio. A dirt road north from Kontopouli leads past blinding white salt flats called aliki to Agios Alexandros, once a picturesque village with a tiny schoolhouse, now a sad little heap of stones where goats browse.

To the left is the very rough road to Kavirio, a ruined pre-Classical sanctuary perched on a cliff overlooking Pournia Bay, dedicated to gods older than Olympians. The remains of halls larger than the Parthenon, and of columns, streets, and houses, are now contemplated by the rabbits whose borrows overlook the beautifully maintained site.

From the main road another rough way leads to the very extensive site of the great city of Hephaistos, only a tiny part of which has yet been uncovered.

The farthest village to the north is Plaka, possibly the oldest village of the island.

There are flights at least daily for Athens and Thessaloniki, and air service four times per week from Lesvos. Boats form Rafina to Kavala stop at Limnos four times a week, and three times weekly on the return trip. Boats from Piraeus run once or twice a week. There is irregular service to Lesvos. Local boats sometimes make trips to Agios Efstratios, a tiny nearby island with rooms to rent, some great fish tavernas, and a secluded coast.

Island buses run from the plateia in Myrina. The KTEL bus shelter posts daily routes; in general, there are two daily buses in each direction. There is also a taxi stand in the plateia near the bus station. Cars and motorcycles may be rented in Myrina.