Kythira is the seventh island of the Ionian and is is an island nobody ever remembers. This is hardly surprising since Kythira lying off the south east leg of the Peloponnese and some 35 miles northwest of Crete, is a good 180 miles southeast of Zakynthos, the southernmost of the main group. In fact, its inclusions among the Ionian islands is a historical accident. Like the others it was a Venetian colony and part of the package ceded to England by the Congress of Vienna. But it has virtually nothing in common with its siblings; geographically, it represents one of the last surviving fragments of the land bridge between Africa and Europe, and it is administered today from Piraeus.

Physically, Kythira consists mainly of a high, treeless plateau with an alluvial valley halfway down the east coast that ends in the beach at Avlemonas. There are none of those lush green areas found in the other Ionian islands. Instead there are gullies, ravines, and windswept moors, making the scenery more dramatic than romantic.

Sightseeing in Kythira is a matter of individual initiative and intuition an organized tour exists, but no one patronizes it. Most people go to Kythira to get away from all that. The search for adventure does involve some risk, however, Kythira's season is short, from June to September. If you go before or after, you;ll find few tavernas open; if you go at peak time, you may have to bed down in a stable or sleep in your car. The islands population booms during the summer with the return of many of its native sons and daughters from Australia. It has also suddenly become fashionable among Greeks in search of unspoiled charms. 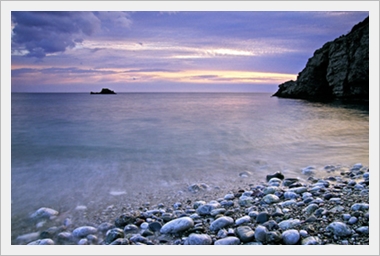 Some of the lovely beaches of the Kythira island are:

Kythira has two ports: Kapsali to the south, Agia Pelagia to the north. Most ship-borne travellers land at Ag. Pellagia, a windswept, ramshackle resort with a few sandy beaches, such as PLATI AMOS. But the rest of the island is far more picturesque with traditional Ionian architecture leftover from the British occupation, Venetian remnants here and there, and mountains dotted with monasteries. Kythira's population of 3.000 or so is scattered among a plethora of villages, of which the largest is Potamos, a market town about a 15-minute drive southwest of Ag.Pelagia.

On the south side of the island lies Chora and its port Kapsali 3km below. Tiny Chora, the capital, has none of the zip associated with a main town, but it has an engaging atmosphere, thanks to the small Neoclassical buildings around the plateia and its imposing Venetian Kastro. Kapsali is the tourist centre of the island; its beach is lined with tavernas and rooms to rent. The beach is ordinary but it has the advantage of being accessible. 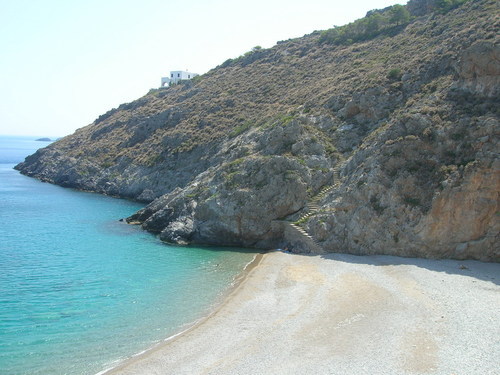 To see the rest of the island, a car of scooter is virtually essential, as public transport is very erratic and taxis will not want to risk their tires on the more "interesting" roads.

One must is a visit to the lovely inland village of Mylopotamos, roughly equidistant from Potamos and Chora, with its charming fountains, shaded square, and churches. Less than a mile away is Kato Chora, the site of a Venetian mini-fortress complete with arched gateway, sculpted lion, and several tiny stone-tiled churches. Just before the entrance to the fortress stands another anomaly, an impeccably constructed English school, Gothic windows and all, erected in 1825.

Finally the cave of Ag. Sophia, with Byzantine wall paintings and several chambers of stalactites and stalagmites, may be explored just outside Mylopotamos.

The beach on the east coast at Avlemonas, the island's largest-too big ever to get too crowded-is worth a trip. There are a few simple tavernas in the tiny fishing port nearby. And if you get tired of sunbathing you can always look for shards as Kastri (Paleopolis-OLD TOWN) on the southwest and of the bay. This is where the Minoan acropolis of Skandia, one of the Cretan empire's earliest colonies (2000B.C.),once stood.

The volatile seas and weather of Kythira can play havoc with travel plans, as both getting here and leaving are outside human control. Thus, daily flights may be abruptly canceled because of high winds or fog, and the Flying Dolphin (5 hours, four times weekly)is equally subjected to the caprice of weather. A surer but slower alternative is the twice-weekly steamer from Piraeus (10 to 12 hours)which stops at Gytheion after Ag. Pellagia and before going on to Kapsali, Antikythera and Crete (Kastelli)