Kos Island, Thirty miles long and about five miles across at its widest point, Kos lies on a northeast-to-southeast axis three miles from Bodrum(Ancient Halicarnassus)on the coast of Turkey. Kos town is at the island's northernmost point, and the Dikeos mountain range forms a backbone along the greater part of its northeastern shore, ending in a long, wide sweep of beach at Kardamena on the southern coast.

There are sandy beaches on both sides of Kos town and skirting the western green fields. The island's beauty and mild climate have drawn visitors for many centuries, and the beaches are an added attraction for today's tourists.

Thousands of people arrive at Kos airport (just west of Kardamena) every week during the summer season, either on European charter planes or by Aegean Airways from Athens. Many visitors stay in the town, which caters to them and grows to accommodate them. 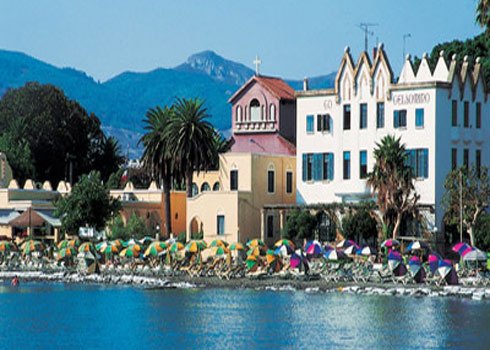 Writers often complain that Kos has been spoiled. It's true there have been many changes in the recent years. The sidewalks in town, once mud, are now paved and bright with flowers, though the trees still remain to provide welcome shade. The country roads have been surfaced, making easier traveling for the many cyclists who pedal down to their favorite beaches every morning.

The town beaches have changed too. The factories to the west are gone; the tree-lined roads have been extended and are full of restaurants, hotels, and discos catering to the younger set. These establishments now spread around the point which used to be the preserve of the Greek army.

From the town beach, fringed with tamarisks, the hydrofoil leaves daily for Rhodes and, in season, for Patmos and other islands.

At the heart of Kos town the fishing boats now share Mandraki harbor with dozens of visiting yachts, and tour boats headed for the islands of Nisyros, Pserimos, Astypalaia, Kalymnos, Leros, and Patmos, or for Bodrum in Turkey. The evening stroll has become an opportunity to compare tour prices, which vary considerably, and to choose the next day's outing. 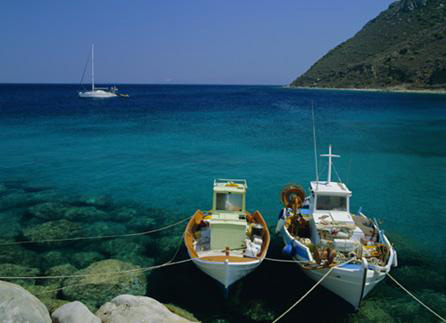 The harbor, flanked by restaurants, tour agencies, fountains, trees, and flowerbeds, is dominated by the large 15th century Castle of the Knights, whose moat was long ago converted into a palm-lined avenue. This is the first sight of Kos for those who arrive by sea. Ferries and cruise ships, too large to enter the harbour, tie up under its walls.

Immediately behind the castle, beside the old mosque of Hadji Hassan, is the ancient Hippocrates' plane tree, which is really only about a half-dozen centuries old. It center is hollow and its great branches seem to sprout from little more than the bark. Old marble columns are no longer sufficient to support them, and their weight is now supported by scaffolding.

The most famous of the Koan antiquities, the Asklepieion, is a couple of miles southeast of town. Take a bus, a tour, or a taxi, rent a car or a bicycle, or walk-but go! This is something not to be missed.

Hippocrates, the most famous healer of ancient times and the father of modern medicine, was born in Kos circa 460 B.C.He taught at the Asklepieion, though the present site wasn't completed until after his death, its predecessor having been destroyed in an earthquake. This sanctuary, dedicated to Asklepios, the god of healing, was both a place of pilgrimage and a place of healing. Patients came form all over the ancient Greek world and would sacrifice to the god, pray for a cure, and put themselves into the hands of the doctor-priests.

The main artery of the island skirts Mount Dikeos. Side roads wind up its gentle lower slopes to small villages with stunning views over green fields to broad beaches, a white expanse of salt pans, and across the Turkish coast.

In season there are daily ferries linking Piraeus and Rhodes via Patmos, Leros, Kalymnos, and Kos, as well as one or two via Paros, Amorgos, Astypalaia, Kalymnos, Kos, Nisyros, Tilos, and Symi. There is also a hydrofoil service from Rhodes to Kos, daily in summer. Another weekly boat visits the northeastern Aegean islands. Careful checking of the existence and times of all ferries is essential.

Ferry service also connects Kos with Bodrum, Turkey. Kos is a port of entry for Greece. There are Aegean Airways flights to and from Athens (four to five daily). Schedules are subject to change.