Kea Island also known as Tzia is an island of the Cyclades archipelago, in the Aegean Sea, in Greece. Its capital, Ioulis, is inland at a high altitude (like most ancient Cycladic settlements, for the fear of pirates) and is considered quite picturesque. The capital village has the Medieval castle and the famous Stone Lion. Other major villages of Kea are Korissia (the port) and Vourkari (a fishing village) 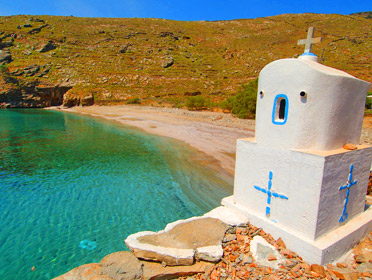 Kea is a strange and slightly mysterious island. It is one of the largest in the Cyclades and there are loads of excellent beaches, many archaeological sites and one of the most amazing traditional villages in Greece.

Kea was once called the Water Island, Ydroussa, and it is believed that the name is connected to the water nymphs, that lived here according to mythology. Because it was such a pretty island, the gods' got jealous, and sent a lion to ravage the land.

There are several beautiful beaches such as Otzias, Galiaskari, Pisses, Koundouros, Kambi, Orchos, Spathi and Sikaminia.

The most famous sight on the island is the Lion of Kea, or Lionda. It is a big, archaic sculpture of the mythical lion

Porto Kea Suites Beach Hotel Not rated yet
Lying at the edge of the port of Kea Island, nearby the quaint church of St George, Porto Kea Suites Hotel is a wonderful retreat overlooking the port …