Not very far from the town of Rhodes, in the bay of Trianta which lies at a distance of 15 km, is the location of the ancient city of Ialyssos.

According to the legends, the earliest inhabitants of Ialyssos were Phoenicians, and they held the place until a Greek named Iphiklos used a trick to make them leave the island, and so put an end to their rule.

On the other hand, the name Achaia by which the Acropolis of Ialyssos was known in antiquity (now called Philerimos) clearly suggests a connection with the Mycenaean Achaeans of the 15th century. This connection is further borne out by archeological findings, such as the large Mycenaean cemetery discovered on the hills of Moskou Vounara and Makria Vounara.

The Achaeans were succeeded by the Dorians in the 12th and the 11th centuries B.C. and it was then that Ialyssos spread to the northwestern side of Philerimos. Archeologists have dug up geometric and archaic period graveyards in this area.

In 480 B.C., the foundation of the city of Rhodes marks the beginning of the decline of Ialyssos, whose inhabitants emigrated largely to the new city.

In the Middle Ages, Ialyssos served as a first abode to the Knights of St John, who stayed there until they could move to the city. Also Suleiman the 2nd used Ialyssos as his base during the siege that led to the occupation of Rhodes by the Turks. The fact that the place has been continually used through the ages has left profound marks on its ancient monuments.

The large plateau on the hilltop contains the remains, such as they are, of the ancient temple to Zeus Polieus and Athena Polias, a Doric style tetrastyle amphiprostyle edifice dating to the 3rd or 2nd century B.C.

Over the ruins of the ancient building, a Christian basilica with a baptistery was built in the 3rd or 2nd century A.D. In the 14th century, the Knights founded a monastery and a church dedicated to St.Mary in the same area, and indeed on the location of an earlier Byzantine church. 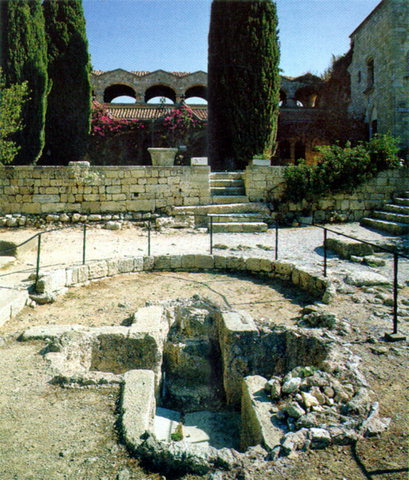 On the southern side of the acropolis, a very interesting fountain of the 4th century B.C. can be seen. Of the Doric order, it consisted of a wall at the back , decorated with four lion heads. A reservoir, this side of the wall, was filled with water that flowed out of the lion heads on the wall. The reservoir was hidden from view from another wall, which was decorated with six posts and seven additional lion heads between them. From the reservoir, the water flowed on the floor of the stoa (portico) that protected the whole structure. The portico had 6 Doric columns corresponding to the 6th posts on the wall protecting the fountains - a fact further confirmed by their many legends on the subject.

An additional element of interest is that the famous Diagoras, the Olympic winner, was born here at Ialyssos.

back to Rhodes Island