Heraklion, on the island of Crete is the fourth largest city in Greece.

Located between the prefecture of Rethymno and the one of Lassithi, it is the administrative capital of the island, the main center for commerce, and since the discovery of the nearby Knossos, the main tourist stopover; few find it attractive enough to make it more than this. Though it is a harsh, crowded city, Heraklion contains many surprises and represents an aspect of modern Crete that can be ignored. It provides easy access to Knossos and Phaistos and has the major museum dedicated solely to Minoan archaeology.

If you are planning to spend some time in the western or southeastern part of Crete, it is feasible to stay to the east of Heraklion at Elounda or farther east at Ayios Nikolaos. From these less frenetic but slightly glitzy resort areas you can comfortably visit Heraklion and these sites in its vicinity.

Staying in Heraklion itself presents few problems, as there are a number of fine hotels in town as well as on the sea. The best in town hotels are centrally located and with respectable restaurants, facilities, and services.

Traveling straight on north you'll reach the port, site of the Kastro, where the arsenals and repair sheds of the Venetians were located. This is a pleasant place to walk in the evenings, with reliable tavernas in the area and, on occasion, rousing musical concerts and dancing.

This Cretan city has a unique fascinations for the tens and thousands of tourists who visit the island from every corner of the world. Several factors have contributed to the position Heraklion holds as the primary attraction for tourists on Crete. It is famous for Minoan ruins; it is easy to make quick trips to the eastern part of Crete from there; businesses offering services to tourists are very well organized as is transportation.

To the west, next to the Koum Kapi harbor, is the Historical and Ethnographic Museum, which has an interesting collection of artifacts covering the Medieval and modern periods. The museum also have a fine collection of Cretans textiles, including typically Cretan embroideries with compact and dense patterns of flowers, figures, and symbols derived from a common repertoire found throughout the Near East. 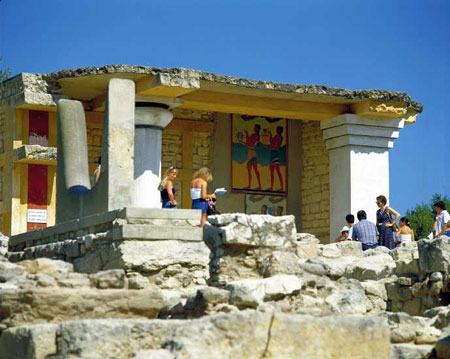 The most popular visitation spot in Heraklion are the ruins of Knossos, which was the biggest center of population on Crete during Minoan times.

This was the palace of King Minos, and is believed to be the starting point for the mythological Minotaur’s labyrinth. A visit to the Great Palace of Knossos, requires at least a day, as the site is enormous and rambles in several directions-perhaps indicating the origins of the great labyrinth.

Because the site was inhabited from Neolithic times(c.6000B.C.) to the fifth century A.D., it is almost impossible for a lay person to disentangle the various levels without a good site guidebook, many of which are in print.

If you travel south from Knossos about another 20km to the small village of Mirtia, you will find a well organized museum in honor of the writer Nikos Kazantzakis.

Outside the city of Heraklion, 5 km toward the west of Ammoudaras beach it is a swimming beach. There are also nice sandy beaches on the east side of the city, such as Karteros, 8 km away, Mallia, 34 km, where the passer-by can find lots of tavernas which serve various delicious and tasteful cretan dishes. When weather conditions are favorable, those who are sports fans can go wind-surfing on the aforementioned beaches. Moreover, those concerned in tennis can enjoy a game at the Tennis Club whereas, for the basketball fans, there are available five special courts.

Those who enjoy fishing can cast their lines into the sea from the beaches at Ayias Pelagias, Hersonissou and far from the rocky coastal areas on the southern coast of the province of Heraklion. Likewise, hunters can 'bag' game particularly fowl and hare, in various rural areas.

Within Heraklion and on the outskirts of town there are many tavernas, outdoors restaurants which offer Cretan music, nightclubs with folk orchestras, bars, pubs, discos and cinemas. 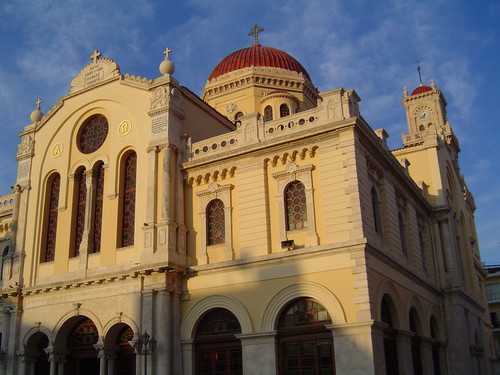 In St. Catherine's Square, southeast of Venizelos Square, is the church of Agia Aikaterini, it's elegant, simple facade pierced by a large oculus typical of churches built in the 15th century in Crete under Venetian influence.

Purists have occasionally been severe in their assessment of Renaissance influences from the West in Crete without talking into account that the impact was softened by a strong and creative Byzantine tradition.

Many of its icons are signed and date from the 16th and 18th centuries. Next to the Ayia Aikaterini is a small church dedicated to the Agioi Deka-the ten saints martyred under the emperor Decius for their profession of Christianity.

The heart of modern Heraklion is its vibrant market, located on 1866 Street, not far from the Morosini Fountain. In addition to the cornucopia of spices, herbs, and masses of fruits and vegetables, vendors offer typical and well made baskets-some for drying cheese-as well as festive Cretan breads, preserved in some mysterious way and covered with delicate flowers of dough.

The journey from Heraklion down through the plain to the southern coast of Crete provides a subtle introduction to the beauties of the Cretan landscape as well as to the vastness of its history. On the road to the Phaistos, you will be driving through vineyards that produce some of Crete's best Malvasia wines.

The view from Phaistos, soaring out over the Messara Plain beneath it, has an indescribable serenity. As ancient as Knossos but very likely a dependency of it, this palace was every bit a sumptuous as the former. Destroyed during the earthquake of 1700 B.C., Phaistos was rebuilt and, after the arrival of the Greeks, was an independent state until it was destroyed again in about the second century B.C.

Not far from Phaistos is the southern coast, and after reaching sea level the road divides for either the northern road to Agia Galini, the middle road to Komos and Matala, or the road south to Kali Limenes, identified as the port where Saint Paul was shipwrecked. This region can be very dry in August, and its potential as an attractive destination for tourists is being developed at rapid pace.

Some of the most beautiful Heraklion beaches - Crete: 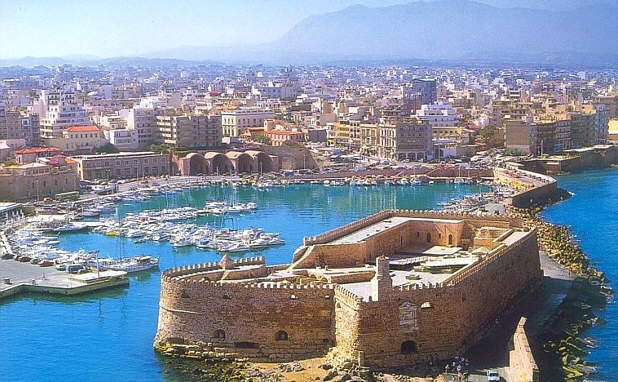 The prefecture of Heraklion is offered also for many and interesting excursions which can combine both the love for the nature and the love for the ancient, since the region is 'sown' all over with well-known or lesser known signs that played an essential role in the history of Europe, along with the fascinating mountainous and sea-side locations. These excursions are towards the provinces: Malevisio, Kainourgio, Pyrgiotissa, Temenos, Monofatsi, Pediada and Viannos.

The extent of the Heraklion prefecture's coast on its southern side is over 100 km in length, but even here we have the same peculiarity: There is no coastal road network but this does not exclude the access to the sea.

From Agia Galini to Kali Limenes, there are small sailboats which serve all areas of the coast like Lenta, the ancient Levi, the Monastery of Koudouma, Priansos, in the inlet of Tsoutsouro, the bay of Keratokambos, Arvi, Faflago, Psari Forada and Tertsa.