Corfu Island is situated off the coast of Albania, it is the flagship of the Ionian Islands, the greenest and the most developed. Nearly 100.000 people live on this, the northernmost island of the Ionian sea,and approximately 500.000 tourists visit every year.

The later are lured by charm of what may be Greece's most beautiful town in combination with the incredible variety of island's landscape, which ranges from the lush, lagoon-like coves on the east coast to the dramatic cliffs and broad, golden beaches on the west, with olive-carpeted hills and two tall mountains in between.

While development, both tacky and sophisticated, has sprung up on both coasts to accommodate visitors, the interior has remained surprisingly unchanged.

Old woman in traditional costume may still be seen in the narrow streets of many mountain villages, and the riotous vegetation soon camouflages even the most flagrant architectural mistakes. Though an English breakfast may be easier to find than a genuine Corfiot specialty, Corfu can be much more than its resorts, unless you all want from it is sun, sea and swinging nightlife. 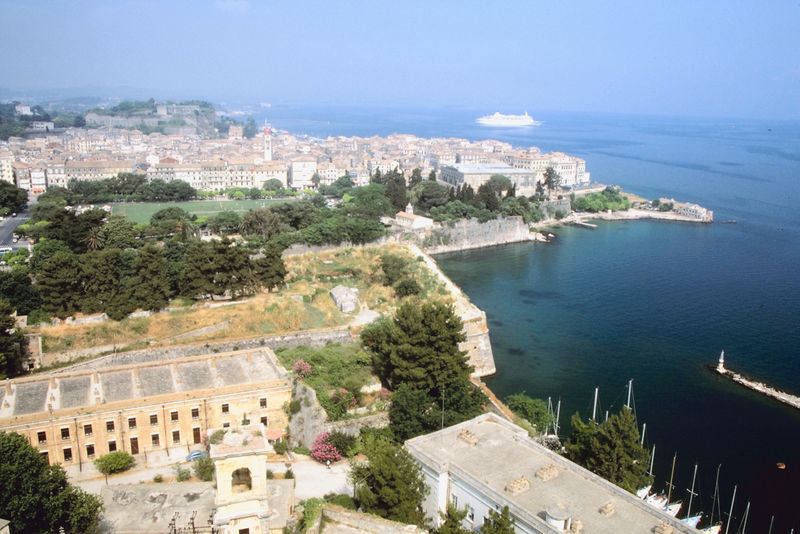 Corfu has been inhabited since the Upper and Middle Paleolithic periods (c.70,000 to 40,000 B.C.)Although there are indications of Mycenaean settlement on the Ionian islands of Kefalonia, Ithaka, Lefkada and Zakynthos, there is little archaeological evidence on Corfu dating to the 13th or 12th centuries B.C. identifying the ancient Phaeacians described by Homer. One theory argues that the name Kerkyra derives from the Semitic word for a past Phoenician boat and that the seafaring Phaeacians were actually Phoenician.

The town of Corfu, in the center of the island's east coast, is built on a large peninsula shaped roughly like a shoe. The peninsula of Paleopolis to the south forms the toe of this shoe, and the smaller peninsula to the northeast occupied by the Old Fort, forms the heel. As your boat nears the peninsula with the Old Fort you can see the two fortified hills that gave Corfu its western name. Little remains of the Medieval Venetian town of Corfu that stood on this peninsula. A plan is being considered to use the Old Fort for the Ionian University; at present if forms the backdrop for the summer sound-and-light show.

There are more than 700 churches on the island mostly italianate in architectural style. The remains of the island's patron saint Ag. Spiridon are kept in the church of Ag. Spiridon(1589-1596), a few blocks west from the northern end of the Liston. saint Ag. Spiridon is credited from saving Corfu from a famine, two plagues, and an Ottoman siege. His sackett is removed from its chapel behind the marble iconostasis and carried in procession around town four times a year: on Palm Sunday, at Easter, on August 11, and early in November. He is held in such reverence that more than half of the Corfiots are named after him. 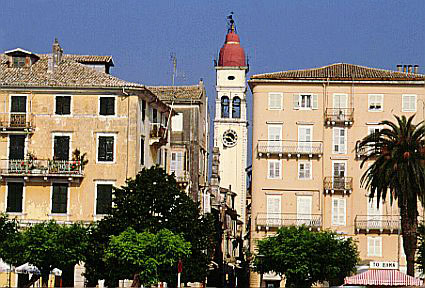 Corfu's cuisine, like her architecture, is heavily influenced by Italy. Among the favorite places of Corfiots and visitors alike-to try local specialties are the Averoff at the old port and Yoyias taverna on Guilford and Moustoxidi streets.

Restaurants frequented more by locals than foreigners are the Porto Corfu pizzeria, at the south end of Moustoxidi street, and o Tsounas , an excellent, reasonably priced fish taverna in the quaint old district of Mandouki, north of the New Port.

If you are going to stay in Corfu town, the Corfu Palace represents one of the last truly great luxury hotels of the old European style.

The island's most famous sights and beaches are, with a few exceptions, to the north of the capital. Do rent a car and explore on your own. The roads are sinuous and narrow-too narrow to accommodate two-way traffic with safety, so proceed with caution whatever your choice of transport.

You can reach Corfu by charter or regular commercial flight from many European cities. From Athens, four or five flights make the 50-minute trip each day during the summer and two during the winter.

You can travel throughout Corfu by public bus. Most of the buses serving the nearby suburbs of Corfu town leave from Theotoki Square on the western side of the town at the northern end of Alexandras Avenue. There are also excursions by boat to Parga on the mainland, the nearby island of Paxi, and the northern offshore islands.