The 325 square miles of Chios are crammed with contrasts, from the worldly, sophisticated capital of Chios town, to dim and sacred caverns, from primitive huts to the rich jewels of the church and the arched cells of feudal strongholds-to the simple pleasures of sand and clear waters.

This was always a rich island, producing crops, wine, mastic, silk-and merchant seamen. Instead of establishing colonies, Chios established trading depots around the Mediterranean. Homer claimed that a descendant of Minos the Cretan brought wine to the island.

Chios was an island state by the eighth century B.C.. In the seventh and sixth centuries B.C. trade and the arts flourished. 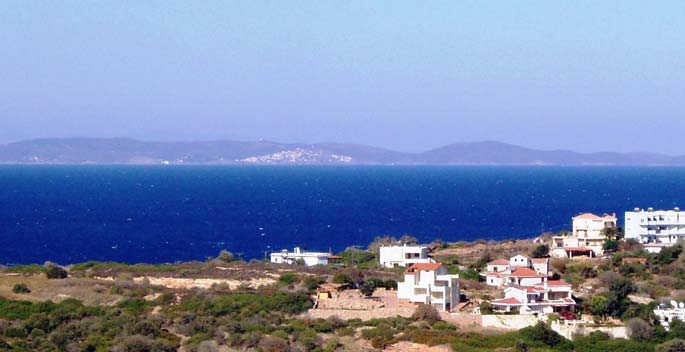 The port, also called Chios, is a busy modern town in the middle of the island's east coast with boutiques, restaurants, coffee bars, and plenty of hotels, ranging from the elegant Chandris, to shabby rooms. There is even a tiny red-light district.

The modern city has grown around the port, engulfing the Medieval Kastro - the fortress originally built by Byzantines in the tenth century and enriched by the subsequent tenants.

Most of it was ruined either in the struggles of revolution or the earthquakes.

To the south of Chora, are some charming villages, old churches with fine paintings - and the mastichohora, the mastic towns.

The products of Chios have always been related to pleasures: wine, sweets, candy, varnish for paintings, and mastic, a resin used for chewing gum.

Once the mainstay to the Chian economy, mastic ocmes from the lentisk tree, which grows here exclusively.

Now it's sold as gum under the name Elma and as a plain unsweetened mastica, once so popular among the harem ladies, that the pashas treated the Chiots of the mastic villages like diamond miners: body searches as they left work, isolation of the worker's town ships, rigorous penalties for theft.

But the mastic villages were spared the terrors of 1822. 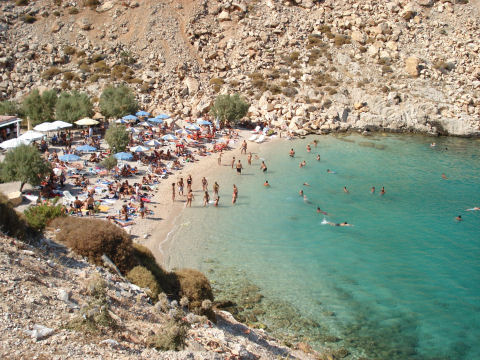 The numerous beaches of Chios Island will satisfy even to most demanding visitor.

Some of the beaches are located near the city of Chios: Karfas, Mega Limnionas, Aghia Fotia, Afanis Beach, Lo Beach and Daskalopetra.

In Pyrgi, 25 km southwest of Chora, the walls are decorated with xysta. Women sit on their steps in skirts, apron, and kerchiefs, chatting and embroidering.

Farm women come is with donkeys loaded with potatoes and vegetables to market here. The church of the Assumptions of the Virgins in the square is decorated with xysta crosses and angels.

Not far from Pyrgi is the site of the Temple of Apollo, at Phanai, whose first remains date from the ninth century B.C. On the hill are traces of a Byzantine fortress, and beneath those, remains from the Bronze Age.

Along a beautiful, peaceful road west out of Chora, among olive and pine groves, is the Nea Moni new in 1042.

Tall cypresses, crumbling stone, and the sound of goat bells greet you. A sign at the door requests respectful behavior. For most of its life Nea Moni was a wealthy, important institution with a famous library.

Pebble beaches dotted with tavernas and rooms to rent line the shore north of Chora.

At Daskalopetra(teacher's rock) five minutes from Chora, the bus drops you in a pretty plateia(square) with two snack bars anda playground; continue uphill to the poet's classroom, a circular site complete with seats and altar reputed to be where Homer conducted classes.

Lo beach, along the coast road, is a private pebble beach to which admission is charged. There are showers, pedalos, and a million people, especially in August.

To the northwest the character of the landscape changes from rock to high rolling hills. Beyond Piteous, however, endless acres of tree trunks lie like burned matchsticks on the barren ground. Not long ago it was beautiful pine forest. All across the center of the island the hills have been scattered.

Along the rocky landscape of the northern shores, pink oleanders fill the river banks. Glyfada, Nagos, and Yiossonas are clean pebble and sand beaches. As the roads become more difficult, the beaches grow less crowded.

About 60 km from Chora in the northwest corner of Chios, is the enchanted village of Ayias Galas, unchanged for a thousand years.

A few of the villages in the northwest are occupied; occasionally a house is even repaired or built. In general, mountain village means that what you get is a mountain village.

Volissos, on the southbound road, was once an important village, crowned with a castle with six round towers; it is another candidate for the birthplace of Homer. There are wonderful unfrequented beaches on this coast.

On the sand and pebble beach at Limnos under burned hills and a ruined castle, sits a resort with large shade trees, a modest taverna, pedalos and umbrellas, and even rooms to rent.

On the coast is a little green spot, and in the green spot is a pretty bay, and in the curve of the bay, a few minutes' drive north, is the beautiful huge courtyard of Ayia Markellas Monastery, on a lovely clean beach.

Psara is ideal for those who would like to withdraw from the world and meditate for a few days. It's a barren little place, and once you go, you are stuck until the next day, probably in the old jail, now the EOT Guesthouse, where the taverna is excellent. Boats go to Psara on alternate days from Chora and from Limnia, so it is possible to leave from Chora and return the next day to Limnia.

Inousses is actually a group of nine islets off the northeast coast of Chios, but unless you have a private boat, all but one -the largest- are inaccessible. Caiques leave from Chora several times a day. As you come into the main harbor, which is sheltered by tiny islands, at least seven churches are visible, each a different color. The hillsides are green, with large houses far apart from one another.

In winter, there are about 500 inhabitants, when the shipowners' families return for their holidays, there may be as many as 2,000.

There are flights two to four times a day from Athens to Chios, and once or twice a week from Lesvos, Samos, and Mykonos. There are daily ferryboats in season, and frequent service to Lesvos. Ferryboats go twice weekly to Thessaloniki, as well as Kavala/Aleksandroupolis via Limnos.