Chania is a place full of charm and beauty. Below the wild-natured but also proud looking White Mountains, the valleys are fully planted, evergreen and cool and covered with forests of olive trees, orange trees, chestnut trees, vineyards and fruit tree plantations which produce juicy , sweet and fragrant fruits. There are also numerous flower gardens, endless picturesque sandy beaches, archaeological and historical sites and medieval and Byzantine monuments. The new city of Chania is sunbathed and decorated with millions of flowers. The ancient town, located around the port and having Venetian houses built in it, offers a rare image of beauty. Building structures and fortresses have through the centuries maintained the form and the traces of the historical grandeur.

Chania is build and erected on the ruins of ancient Cydonia, one of the three major towns in the ancient post Minoan Crete. According to mythology, the founder of Cydonia, the so-called ‘Mother of Cities’ was the king Cydon, the son of Hermes and protector of wayfarers. 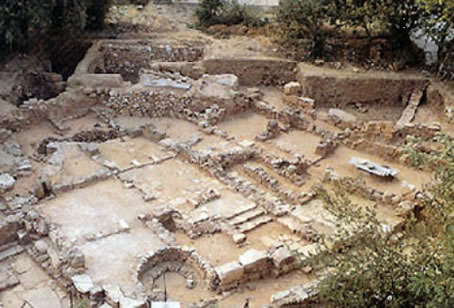 Cydon has stood renowned for this famed hospitality, which virtue he has left as a ‘royal’ heritage to the inhabitants of this place.

In 1252 the Venetians built the town of Chania, a town that flourished some time later. In the 16th century the big outer fortress, the port, a strong breakwater and a naval station were constructed. Magnificent building structures and splendid churches were also built. At that time, the town of Chania has been characterized as the Venice of the East. In 1645, Chania was captured by the Turks and it is since 1850 that the seat of the Administration of Crete has been shifted to Chania. Until 1912, the town had been the capital of the Cretan State whereas, after the union of the Major Island with Greece, it became the seat of the General Administration of Crete.

Among the most significant sightseeing historical spots in the city are;the Archaeological Museum, with a rich collection of findings pertaining from the Neolithic Age to more recent years.

The area that particularly bewitches the visitor of Chania is the picturesque Venetia harbour with the old town rising above it. It is at its quay that you are going to take your night and morning walks, and relax at the tavernas and the nice cafe –ouzeries, enjoying also the blue of the sea.

At the mouth of the harbour there rises above it the Venetian Beacon which was built, in 1570 in the form of a round tower.

Not only in the city, but also outside the city(in such places as Souda, Akrotiri, Kalives, Daratso, Galatas, Agia Marina, Stalos, Platanias, etc.) there are bars, pubs, discos, restaurants, rural entertainment centres offering traditional cretan music(lyre and lute) and various other delicious cretan dishes.

Tennis fans can play this game on the Tennis Club court, on Dimokratias Street. Moreover, next to the tennis court there is a covered and an open field for volley and basketball.

All the north beaches in the prefecture offer for sea-skiing, sailing, and windsurfing. You can go fishing anywhere on the seaside. As for the hunting game there are: hares and a great variety of birds including partridges, woodcocks, thrushes, wild pigeons etc.

Excursions within the prefecture of Chania

With the city of Chania as a central starting point, there are at least five feasible excursion areas within the prefecture: Peninsula of Akrotiri, Peninsula of Rodopos and Kissamos, towards Kandanos as far as Paleochora, towards the province of Cydonia as far as the gorge of Samaria which ends at Agia Roumeli; and finally, towards the province of Apokoronou, with an end at Chora of Sfakia. Moreover, to Therissos and other regions within the prefecture of Chania.

At a distance of 5km, before Gouverneto, there is the monastery of Agia Triada of Jagaroli, built in 1613- as it is written on the Wine- Cellar - by the orthodox monks Laurenzo and Jeremiah of the venetian orthodox family of Jagaroli.

In the Monastery there has been established a museum with many ecclesiastical heirlooms and byzantine icons painted by Scordilis; moreover, there is a library with more than 700 volumes available.

In Akrotiri we find wonderful beaches ( Marathi, Kalathas, Stavros) and places offering for fishing and hunting, particularly the spot called Minoa(20 km) where game is in abundance.

At a short distance from the city of Chania (15.5 km), at the foot of White Mountains, there is the heroic village of Therisso. To reach there and starting from the Public Market House, before the bridge of the river Cladissos, the visitor turns to the left and approaches the refreshing spot called the village Perivolia. At a distance of 500 meters, one can reach a beautiful gorge, the Gorge of Therissos which, quite justifyingly, has been named by the inhabitants of the area the ‘Gorge of Venizelos’. It takes a distance of a few kilometers through the gorge, before reaching Therisso.

Therisso is a small village plunged into the foot of the White Mountains at an altitude of 580 meters, with incomparable beauties and wild splendour. Wonderful is also the view from the location Aliakes, ornamented with very tall and long living plane trees and endowed with rich water fountains.