Following the main road and after crossing the bridge of the legendary gorge of Aradena which is built on the site of the ancient city Aradin.

Aradena Gorge is on the west side of awarded gorge of Samaria. Till recently, the access to the villages Aradena and Aghios Ioannis - that follows - was only possible on foot or by horse whereas wayfarers were obliged to descend and than mount a ravine 130m deep. The inauguration of this bridge on December 28, 1986 put an end to the suffering of all the passers-by.

It is a very important project that many generations had dreamed of and which the very well-known Nick.I.Vardinogiannis Company realized, applying 40 million drachmas for its construction. Through this donation thd Vardinogiannis family fulfilled the dream of the unforgotten politician Paul Vardinogiannis who had given this promise to the inhabitants of this isolated village Agios Ioannis. It was there that he was born and where years ago his ancestors made the war and were distinguished to chief-leaders during difficult revolutionary periods.

At a short distance from the Aradena Gorge we find two caves named Paterotripes and Dracolakki and at a depth 500m, there is a spring of water that the shepherds transported in skin bags for their animals to drink. In Aradena we also found the byzantine church of Archangel Mikhail (14o century) which has interesting frescoes. It was in this church that the inhabitants of the village came to give an oath or settle their disputes.

From here the road - the opening of the main road has not yet been realized, leads to the village Agios Ioannis, built at an altitude of 780m and on the southern foot of the highest summit of the White Mountains (Lefka Ori) Pahnes (alt.2,453.65m). Its habitats main occupation is cattle breeding. In this village there are two old churches Aghios Ioannis and Panagia bearing rare fresco-paintings. From this village anther pathway is loading after several hours to Livaniana and Loutro from where we have a magnificent view of the Libyan Sea. If we come back to Vrisses and take the main road of Chania-Rethymno, on the 39.1km we meet to the right another seaside resort, Georgioupolis with hotels, rooms to rent, country tavernas, petrol station, police station with a nice beach. It is one of the most magnificent spots of the island. Its name was given after the Prince George who was the High Commissioner of Crete. Southern and on a hill the village of Mathes is situated a small church of gothic style (14o century) was built on the hillside . It was dedicated to Saint Antonios and on its vault a plant named carob-bean tree once sprang which was believed to have divine properties. Unfortunately, a conflagration consumed it completely in 1983. Close to it, the site "Clima" is situated where the revolution of 1878 was declared.

Going towards the inland of the island at a distance of 6.5km we reach the lake Courna of Corissia as it was called after the name of the ancient town Corissia where the sanctuary of the Goddess Corissia Athina was. Tradition states that on the same spot, the village Courna existed previously which the divine fury doomed to sinking , following the nefarious attack of the father against her beautiful daughter. Even today there are people who say that they see the daughter every noon at the middle of the Lake, combing hr hair.

Another tradition states that the Lake was formed by the tears of the mothers whose boys lost their lives in the battles for the deliberation of Crete. Courna Lake is the only lake of the major island and it is extended in approximately 65 stremmas, while its length is 1.000m and its width 650m. Its beauty is indescribable. 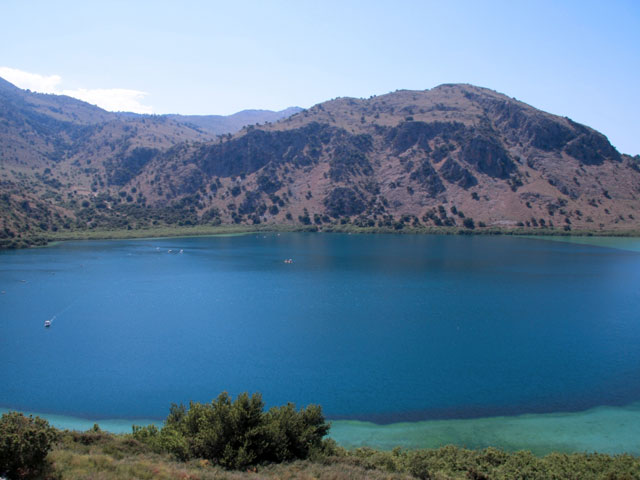 The wild surrounding mountains are reflected in its waters which change from pale green to dark blue, and there is a white sandy strip around the lake. On its north-west side there is rich vegetation consisting of bushes, brambles, reeds and other wild trees.

On the contrary on its east side the vegetation is more gentle. On our access to the lake the area is full of olive trees. Near the lake there are two tavernas serving delicious meals and in the summer the visitor can rent canoes or water bicycles and enjoy the beauty of nature in its calm waters.